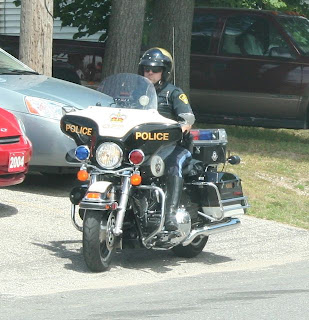 I've heard stories about the soldiers who are training police cadets in Afghanistan. I began thinking about all the cop shows here in North America. The culture of policing in a world where tribal values and war lords reign, it would seem a difficult proposition. Almost like our issues with the Mafia in Quebec. The subculture reigns, with their own values and the need to look after number one. Back to the old style of human nature: fight or flight.

I reflected further, and wondered if it was possible to change the culture of such a place, while trying to instill the value of North America law enforcement notions. The stories the embedded journalists tell seem to indicate that standards of N.A. policing place a lot of stress on self-control in law enforcement. I wondered if some of our more beneficent cop shows might not be a good source of behaviour guidelines for this training. Unfortunately, there are some shows I think simply inure us to the images we see and the behaviour that is condoned, especially in the case of bad cops.

I've been listening and watching the news in Ottawa. That fine line between police brutality and controlling an alleged offender seem to be blurring. I wonder why and how and why someone doesn't speak up for us, the public.

Golden
Case focused on strip search and racial profiling.There were no standards, and it is an intrusive exposure by officers who have no reason to suspect someone has hidden guns on their person. Intimidation, strip searches, are not protective, but to humiliate. To degrade a detainee on a routine basis is degrading and demeaning. It is like a visual rape. Rosie Schwartz (2001), at the time 69 years old, taken to the precinct by an office, taken into custody and told to remove her clothes. Simply a power trip. She took them to small claims court:
... strip-searched by two officers in front of a video camera has received a $10,000 out-of-court settlement from the Toronto police force.


There were accountability measures, like the SIU, but data from Toronto (2005) but Toronto police stopped releasing data on a regular basis. But no longer do they release the information. At that time it was 37% of the people, of 61,000 taken into custody, your chances are about 1 in 3 of being strip searched in 2004. Increase from 2001, when it was 31% of all detainees. John Sewell thinks these numbers are now higher.


As a result of these kinds of actions, the Toronto Police Accountability Coalition publishes a newsletter.


Stories of police brutality abound in the past while. Perhaps it is time that society declared it is offensive and must be stopped.


Video of homeless man being kicked released
Officer in 2009 footage also involved in strip search of Stacy Bond.
AHA. A repeat officer/offender, and still working on the force?
Gary Dimmock interviewed Stacy Bonds herself for this article:

Strip-search in police cell 'a travesty,’ judge rules
OTTAWA — A judge has condemned a handful of Ottawa police officers for subjecting a female prisoner to “an indignity” in a strip search of the young woman, who had her shirt and bra cut off by a male officer, only to be left partially clad in soiled pants in a jail cell for three hours.

And, since the police have been protecting one another, Ottawans are lashing back. Qu'elle surprise!
Ottawa police face public backlash
Ottawa police officers say they are bearing the brunt of a public backlash over the release of surveillance cellblock videos showing questionable police behaviour


Profane comments, shouted at police from passing motorists, simply seems trite compared to the emotional scars a strip search would do to a human being. Let alone being left half naked, or in soiled undergarments.


It is very bad optics that police are not stepping up, standing out, and standing away from these officers who humiliate for revenge and fun. I hope, once the SIU figures it all out, that something will be done.

Rather a sad state of our police. I listened to he current this morning. The g20 security effort really smacks of abuse. The taser issue is another problem. There are many excellent police officers. It's too bad that the abuse by some give everybody a bad name. We need excelelent policing. Even the bad guys need good and proper police tactics.

Canada is a civilized country!