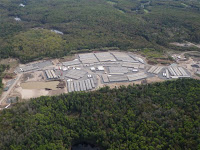 I have been posting info about G8, for example, and its impact on us. We have some nice, new signs, new buildings, a new fence in Hunstville (to be used for off-leash dog walkers when G8 is over?). For example, Most of the security and police officers will be staying at White's Pit, a 24-hectare quarry that has been filled with rows and rows of portable trailers. Brian Tapley's photos are shocking to me. As a local resort owner, one wonders the impact on them, for example.

They cannot complain, being local business owners. The giant sink hole that is G8. Billions of bucks sunk and flowing out to some, but not all.

The warning signs were there. 'Hidden entrance'! 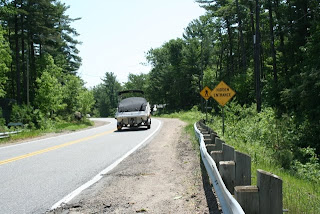 I am deeply suspicious, too, that G8 / G20 protestors have become involved in the great SEO marketing ploy, by including bizarre ads on this page. I'm not sure that Muskoka knew what it was in for when Mr. Harper signed us up for the G8. I'm sure Mr. Clement knew! He is having a great time with photo-ops, opening new buildings and infrastructure, and appearing everywhere. 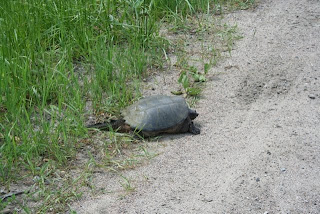 I loathe the spending. But I do not have a say in the whole deal! In fact, neither do the Huntsville residents who must register friends and foes in order for them to visit their establishments.

The additional costs revealed this week include more than $1 million to ensure the food for world leaders is safe. What? Food tasters?! Feed it to the 300 security folks housed in the quarry!

The money is being snapped up like nothing I've seen. Toronto's mayor is using the opportunity to snap at the federal government for this spending. Everyone wants a sound byte.

It is the residents, those who depend upon hourly wages, or local business, who are going to suffer. The webhosting company, muskoka.biz, is using the G20 to broadcast propaganda for protesters. It is bad enough that local residents are going to be impacted financially, physically, but this usury seems wrong to me. Not-so-subtle messages about Genetically Modified Organisms. Really. 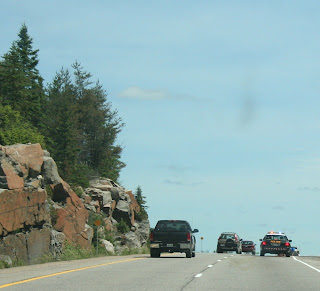 Then, there is the normal issue of driving in Ontario, with a deer killed on the road, the OPP (Bless them!) were sitting in front so that we wouldn't all hit it again.


And, yes, that is bug juice on the window. Welcome to Muskoka!

Then there are the tourists who are driving crazy on a 'normal' Saturday. The guy behind us was driving up our rear, trying to pass as the lane went down to from one to two. 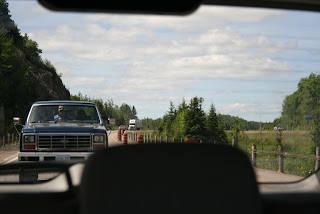 Then, the guys in front didn't have a clue about signaling and actually merging. 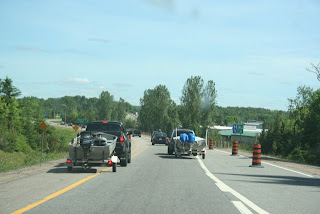 There was talk of businesses in the G20 inner security ring being compensated for loss of business. I would hope that the benefits of the G8 in in Huntsville outweigh the costs for all stakeholders from local businesses, to salaried employees who cannot work for the week that the troops descend upon their town.
Posted by Jenn Jilks at 06:57