And another beautiful day dawns. All is quiet. No boats on the lake. Barely a flutter of wind. It felt like a hot summer day, not September. I nodded in gratitude towards the Universe.

Hubby was doing his Meals on Wheels, while I was out figuring out my gardening priorities, camera at my side. JUST IN CASE! When I took out the garbage, for the second day in a row a flock of geese flew over in "V" formation. I was ready. I was determined. Of course, nature always wants to keep us on our toes. I abandoned my regret for not having the camera ready, and I gazed up at the sky in deep appreciation of the moment.

Who came along, predictably, for her afternoon meal? 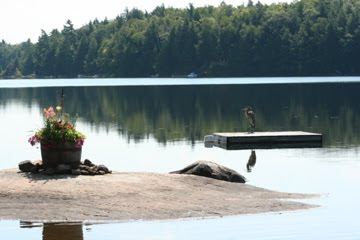 She came in for a bit of a rest. The sun embraced her form, highlighting her silhouette from behind. Already, you can see the solstice wrapping itself around the end of the season. The tilt of its axis sheds a different light on my feathered friends. 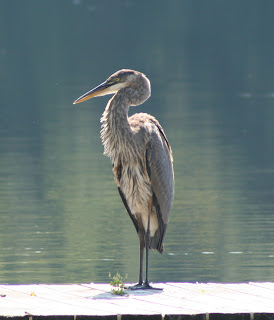 She was totally PO'd with the ducks. You can see her glaring at them. 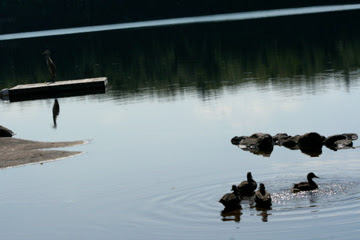 They were frolicking in the water, bathing and doing it one-by-one. Each time a duck would splash about, she'd make a noise. She stood up tall, watching them and grunted/growled at them each time. I was unsure of the sound at first. 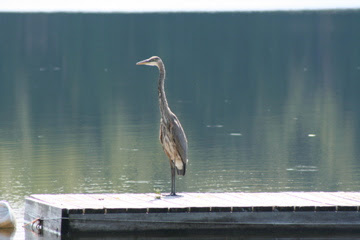 Then had herself a bath -she seems to have fleas, just like the other 4-legged ones around here! 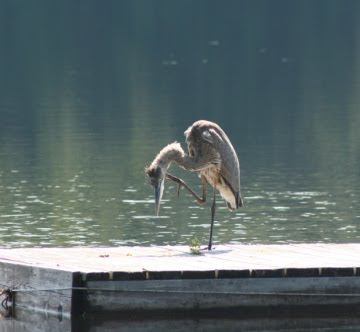 Eventually, she flew off to feed. I kept gazing up at the sky, still waiting for the geese.

I tried to capture her sound, along with a neighbour working with a chain saw on another neighbour's property! I was quite frustrated, but perhaps you can hear her!

Great shots and video!! Your love and appreciation for nature are palpable. I, too, spend much of my day silently saying thank you to the universe for all its delights.

How nice you get to stay up at the lake once the tourist crowds have gone. The silence I'm sure is golden.

Thank you, Bonnie & Yogi! It keeps me off the streets and beside the lake! Still haven't captured the geese in their "V", yet. We aren't a normal migration route. They just gather to the south west of us.

The weather has been lovely. Go figure- summer weather just in time for fall! Love the heron! Our lake ducklings are so big now! They may not be there next time we are up so I said my goodbyes.

You are right, Lorac! Mine took off about 3 weeks ago, but I have seen flights over head and wave (if no one is looking!)

Very nice shots of the heron. I'm jealous! They see me and fly away. Am I THAT scary?

I think the trick, EG, is to be there when they land! You see how close I was when she was on the raft. I was there first and then she landed.

When I was inside, she was way down at the shore and I walked out on the deck 3x's the distance, she took off upset I had interrupted her!

Such a nice treat outside your doors. Especially with no crazy power boaters about. I really like that 4th shot of Miss Heron standing so tall. What an unusal sound she makes. Also liked the video with the soft ripples of water distorting the clouds. Excellent post and captures.

The Heron is so good! You are really lucky to live in this area!

I have been watching a great blue heron who nests at a pond down the street from my house. I learned that people have named him Henry. I took some photos of him in the spring, but haven't seen much of him since. thanks for sharing these beautiful photos of such a magnificent creature