When will they learn? 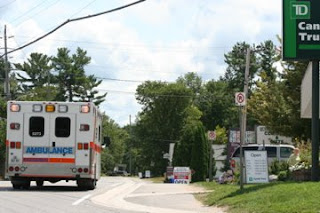 When will they ever learn?
A family swimming in the Bala Falls. The 9-year old child, with a life jacket, floats out with the current. The two men were trying to save her, which they did.

I walked into town, the EMS crew sirens always scream the worst news. The ambulance zoomed by, sirens blaring with the first victim. One is in hospital on life support.
And I saw much grief and shock in many faces as I walked along when the 2nd victim was taken out of the water. 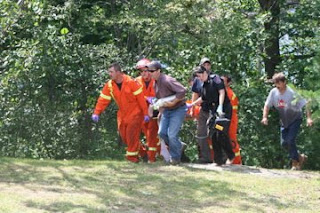 I saw a firefighter walk over to his wife (who was directing traffic) and, with tears in his eyes, got a hug from her and went back to finishing up the job. What a man to be proud of. Who can imagine doing such a job? Our volunteer firefighters are always there at the scene, as well as the paid professionals. I bow to all in honour.

The impact on family members of those who die is profound. No question.

The impact on our incredible First Responders cannot go unrecognised. Incredible men and women who do the unthinkable. Pulling dead bodies from the water. How difficult a job. I know that the ambulance attendant who helped take my failing m 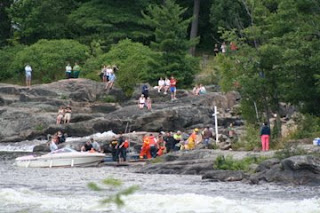 other to hospital the day before she died felt grief.

I look at our wee granddaughter, and understand how much she can be loved. How they can put themselves, and the EMS crews at risk? Why do people insist on taking risks?

There have been extreme warnings. Yes, in the 'good old days' people went swimming in rapids. But these are NOT the good old days. With Climate Change and a cool, rainy July, the waterways are high, flooded and fast-moving. 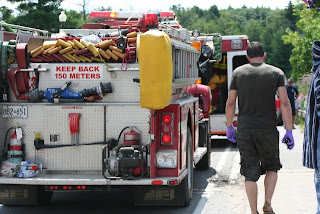 One of the crew told the spectators to move on and off the bridge. "This isn't a spectator sport." I don't think it is so much a sense of gawking, as much as relief it is not OUR family. We are concerned. We want to hope that there is a chance of a rescue. We respect what the men and women in blue do. And those who risk their lives to recover those who perish. 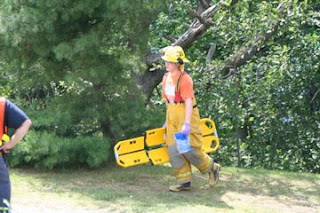 AND I am so proud of our crews.
It is a comfort to know what a good job they do. It is relief to know that whatever happens, they are there and treating those who choose to participate in dangerous activities with dignity and respect. They treat the victim's families with dignity, too.

They are not accidents when you know there is a risk involved.

And if they did not know about the danger, they they haven't listened to every media report over the past part-week, as well as the ads on TV warning people about fast water and hydro dams.

"They were jumping off some rocks located above a fall," said Ontario Provincial Police Insp. Ed Medved. "There was foamy, aerated wate 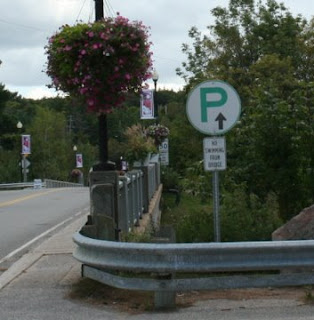 r - so they were swimming in bubbles which is virtually impossible, plus very strong currents in very turbulent water. This was a very dangerous and deadly spot to be swimming in and it was unfortunate they chose to do that."

Then 3 drowned Sunday on the Moon River Falls. They found the first body 24 hours later, the 2nd the next day, and finally found the third body today, Wednesday. It is a marvel to watch the video of crews at work. They have guts.How can they do this?


There was a plane crash in which two died. I read somewhere that his friend told him that a 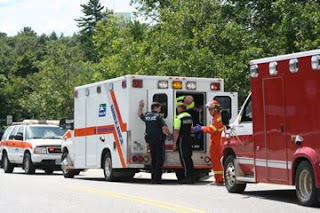 t age 75 he ought not to be driving a plane. How much danger do seniors put themselves in, as much as 20-somethings? Is there a test for those driving a highly dangerous transporation medium as this?
Their plane did not clear the trees. This looks like wind or pilot error. What a risk he takes. We have seen planes on our lake that barely clear the trees. The wind is unpredictable.

Be safe. Remember someone out there loves you. Stay out of fast-moving water.

Culturally, especially for men, it is not cool to say, this looks dangerous, I decline to participate. Instead they summon up all that is macho inside and take the risk. They never think how many other lives they put at risk (bystanders who try to rescue, or first responders), nor do they think of their loved ones. Truly taking such risks is a thought-less act on every level.

Thanks for being our Muskoka reporter!!

I have never heard of so many water deaths in so little time before,Jen. I have to believe it, as it is true but I wish I didn't. A few years back we were called in Mississauga to rescue a man scuba diving in the Credit River during spring run off. The worst time to be around the river. Three of them were swimming scuba. The water was so fast it swept this guys leg under a tree root and snapped it. It was almost impossible to get to him and had to be done in a boat. He made it, but barely. What got me was this man was a professional diver! He told me he knew better!

This is awful, so sad. I'm sorry for everyone touched by this tragedy.

I really appreciate your sensitive reporting. Although I passed scuba diving class in university (a diversion from other classes), I would NEVER enter the water you have photographed, never. Your responses to these deaths is so gentle, even reassuring. Thank you.

Thank you J. Evan, I appreciate that. So much reporting is sensational. There is so much concern in the community. The family really did not understand the current, nor did their extended family in Pakistan. One made a comment on my YouTube video.

There was a plane crash in which two died. I read somewhere that his friend told him that at age 75 he ought not to be driving a plane. How much danger do seniors put themselves in, as much as 20-somethings? Is there a test for those driving a highly dangerous transporation medium as this?

Yes, there are requirements one must meet to get a pilot's license and to keep it. These requirements are much more stringent than those for cars. I beg to differ with the implication that older pilots are somehow less safe. In fact, it is the older and more experienced pilots I trust the most, the ones who are most diligent about safety. I believe for a private pilot's license you must pass a medical exam every two years in order to keep their license. Many pilots choose to go above and beyond and take proficiency training (required for commercial pilots) to keep sharp on emergency procedures.

Seniors over age 70 statistically are more frail. That is not to say that all are at risk for mobility, attention, spacial, and visual issues, but it is much more likely.
I am glad to hear that there are tests for this. But the driving tests are less than adequate.

Senior Drivers in the news is a big issue.
Statistics that demonstrate seniors are more risky than newbie teen drivers: