the time has come 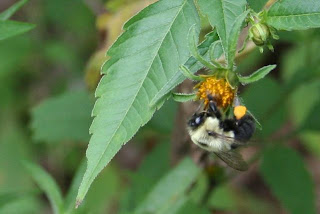 Things are stirring in Muskoka. The birds and bees are active. The fact that the insects are up and about means that many more critters either arise from hibernation, or come back to mate, or for migration purposes to move further north. The spring peepers sing all night, hoping for love.

It is amusing to go out on the deck and call in the cats for the night. The moon and stars sparkle on the lake; peepers peep, wind chimes sing. Lots of times it is the raccoon that comes when she is called, rather than the cats, but we embrace all of our wee friends. It is good that something comes when it is called around this place.

We have had a raccoon we called Butch, then realized he was a she. We call her 'B' now, once we realized she was obviously nursing kits. We recognize her from the awful gouge in her fur/skin from an altercation with somethi 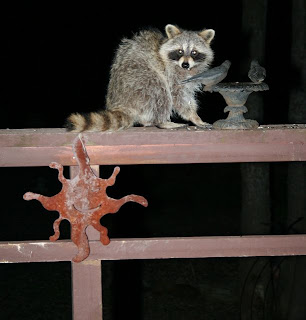 ng. Last night two of her children (we assume!) were having an argument on the deck over whose turn it was to shove his/her face in the bird feeder. We call them all 'Son of Butch'.

The pair of geese we have had at our lakeshore, Eddie & Eva, seem to be nesting. They visit in early spring and do not come back after a point in time. They had an argument with Anne & Gilbert one day, I captured them on my video, and A & G did not come back! We have seen Lonesome Charlie, though. He was feeding on our clover in the rain. Last year breeding season was a bit later and he and Eddie had a disagreement, eventually resolved. (See the photos!) Animals seldom fight to the death - simply to establish who is boss.

Another delightful critter is the wicked red squirrel. She scolds everyone and everything that comes near her squirrel feeder (the birds are collateral damage!). I watched her the other day as she perched in the tree. She was chewing the buds off of the tree, filling her empty belly. Yesterday, she sat above the feeder in the tree as Oliver (our blac 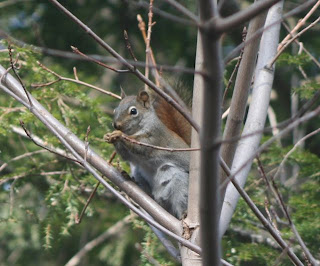 k hunter-cat) sat underneath on the deck. His tail twitched, he watched intently as she chittered away. Neither budged for 5 minutes. I rattled his food dish and Ollie came indoors.

While I am happy to see the critters, it is the seasonal tourists that make me nervous! We have had a burning ban, with the early melt of snow, the lake isn't very high and the land has dried out. It is important, since many weekend guests do not look at these signs, or read the local papers to take in this information.

Many are burning wet leaves, dug up from pockets where they collect under snow, throwing hydrocarbons into the atmosphere. It is hard for those with any allergies or breathing issues. I know of many who are suffering with high pollen counts as it is! 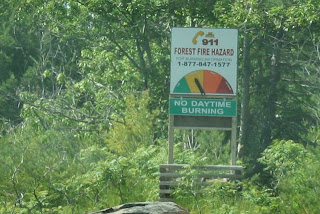 All winter I have enjoyed the absolute darkness of rural life. When my kids were in their teens I would leave a light on if they went out for the evening. I could go to bed and trust that when I woke at, say 2:00 a.m., I could see the light was out and know they were home safely. It was a great way to ensure a good sleep for a worrying mom! Suddenly, with tourists returning, there are lights on all night. It seems as if they are afraid of the dark! I love the dark, and the peace and quiet, wind churning up the waves. Welcome back, all!
Posted by Jenn Jilks at 09:42

Jenn, Thanks for stopping by! What a fun and beautiful place you live. I am jealous of the view of the water and all the creature visiors. I spent some time in British Columbia two years ago and was amazed at the beauty of that part of the world. I will try to stop by again. I should be on my way to work at this moment. Have a great day!

I just stumbled on your blog and am very happy to have done so. Muskoka is my favourite place on earth and reading your blog has just brought me so much closer to it even though I'm far away in Hamilton area. Thank you for sharing your experiences and observations with the world!

You have tons of wildlife in your yard!

Yes, I imagine tourists change your area big time when they arrive in spring. Too bad they bring their city ways with them instead of adapting to a responsible rural life while there.

Now THIS is a cool blog!
Aloha

Thank you, Margaret. It is a great place, but EG is right. We've had boats go back and forth all w/e, starting during the thunder and lightning storm today. They've been burning things outside, and not for food or heat. There are lights on all night all around our lake.

I wish we could educate them regarding the environment: air, wasting electricity.

Wow! You're lucky to live in this place, surrounded by nature in all its grandeur. I'd be happy snapping photos of these animals/ critters myself.

Thanks for sharing your critters in your beautiful home. Earth Day everyday!

lovely racoon and squirrel photos. We have tourists all year round in Edinburgh...

Your love of nature just shines!
It's always nice stopping by your place :)

I love this post! What a fabulous experience to get to have so many wildlife friends! I especially loved the raccoon picture.

Lolo, you are so kind to say.
It is fun, Misty Dawn, to talk to my animals. It keeps 'normal' people away when they think you are quirky!!! :-)

Ok, now I officially want a raccoon for my birthday!!! How cute!!!! Muskoka has colors that make me want to spend weeks on the couch watching movies!

Thanks for your lovely visit. :) Take care and keep smiling!