The bird feeders continue to attract blue jays, chickadees, goldfinches, mourning doves, downy and hairy woodpeckers, and nuthatches, for example. The male cardinal visits mostly at dusk. This was a wet day. 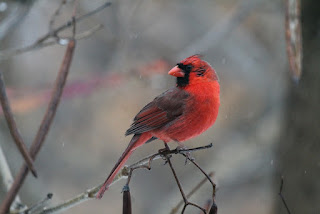 The goldfish are doing well. There was ice on top of the goldfish pond. They don't know what they are missing! 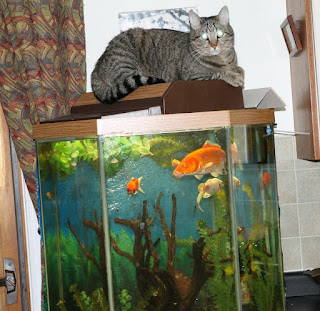 I miss all our seasonal critters. That said, we've a lot of deer and raccoons about, thanks to the pumpkins. The deer are sometimes curious.

Butch raccoon is quite wary. If anything spooks them, up the tree they go!

Deer and Butch from Jennifer Jilks on Vimeo.

We had a fawn with a limp. I haven't noticed it since. We'll see what happens.

This momma is the one with triplets!

Down in the forest, I've two trailcams. One by the frogpond, the other by the deer scrape. What is fun is that the fox appeared on both trailcams, which gives me an idea of where it was headed.

After a couple of weeks of trying, I finally managed to video the actual bucks at the deer scrape. The one buck sneezed, after sparring at the deer scrape. It is mating season. They appear to be brothers, and sort of play fight. They might be 3 years old, judging by their antlers.

Thanks to Eileen for hosting Saturday's Critters # 468!

...it's always fun to check in with critter central.

Hello,
I would be happy to see these deer around my yard, they are so cute.
Love the videos of the deer and the fox. Pretty capture of the Cardinal, love your goldfish too. Thank you for linking up and sharing your post. Take care, have a great weekend. PS, thank you for leaving me a comment.

I love seeing all your deer.

What a gorgeous cardinal! And I love the cat-on-the-fish tank! Fabulous!

I love seeing your trail cams of the deer. I went on a long hike yesterday but just saw one at a distance. Enjoy your weekend. Stay warm!

I do love your critters. Thank you.

I am still curious why the deer like those pumpkins so much, as I didn't think they would get them in real life in the wild unless they lived on a pumpkin farm!!! The fox is quick, change him to brown and do the typing test!!

We used to see cardinals every day, but it's been weeks since I last saw one. Yours is a treat for me :)

Very nice Saturday Critters.
The male cardinal is so colourful, and I enjoyed your videos.

Sparring is a good term for deer competition. They click antlers a few times and that's it. They don't have an all out war.

I enjoyed the deer video. Cardinal come to our feeder mostly at dusk and dawn too.

Beautiful shot of the Cardinal. Lekking is fun to watch.

You have lots happening in your woods!

Your indoor goldfish tank is very pretty. Have you thought about keeping them indoors all year round?

I'm surprised you still have pumpkins. They must be frozen.

Such a funny picture -- the cat on top of the fish tank! Love all your critter vimeos .