Spring is joyful. The birds are singing, the birds are nesting, and all is well with them. It is a small mercy. There are five phoebe eggs! 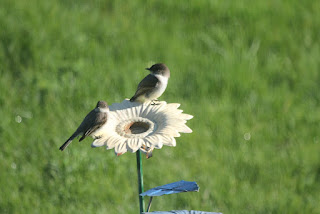 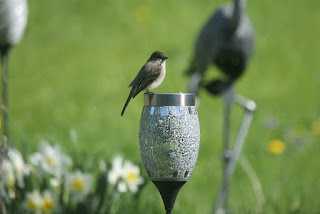 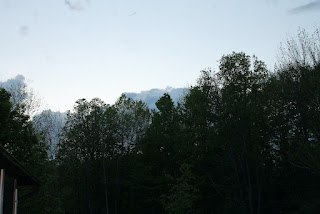 The videocamera just gives a hint of the beauty of the night. 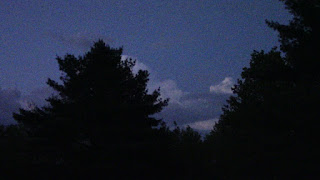 You have to picture this. He was snuggled into the plant. Sitting beautifully, when I held up the camera... 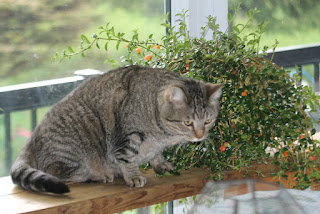 These were originally created for Canada's 150th, in 2017. They came up the second year with yellow.

These are from a newer hybrid, I think. 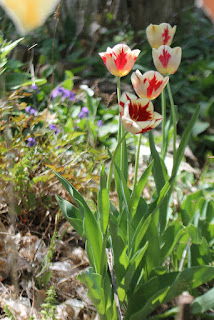 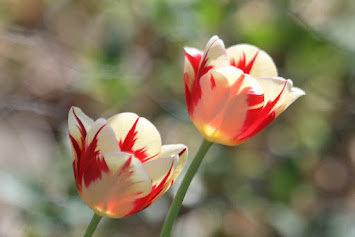 Caitlin visited me on Mother's Day and brought me the hanging basket on the right (below). It's tradition. We sat on the front deck, and she wore a mask. JB has a cancer treatment this week.
Also tradition, the cherry tomatoes in a basket (below, left). I transplanted it to the larger basket. JB can reach up and throw some in his lunch! 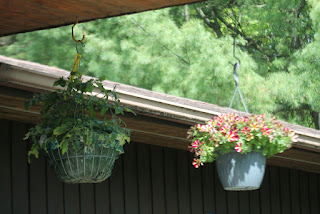 Lilacs are blooming. Can you smell them?! 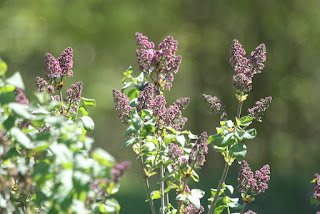 Poor phoebe. The other birds keep wanting to check out the nesting box. I saw a robin, and just the day before a starling trying to get in.

Too late! They are filling it up.  The hole is way too small for them, but the starling sat on top, ticking them off. 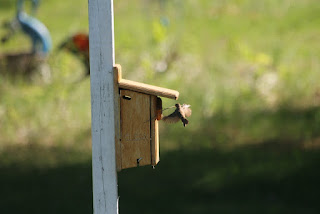 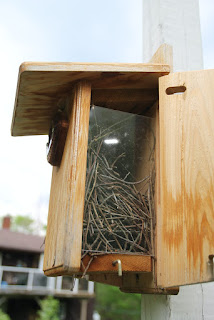 The eavestrough empties into the water barrel, and into the goldfish pond. It will drain down some today. The goldfish were quite excited. 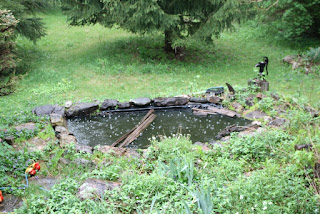 The mosquitoes are really awful. JB has to cover up during his walks. Today, he'll walk in town. It is ridiculous. I put on a bug jacket. I took Cinnamon walkies. 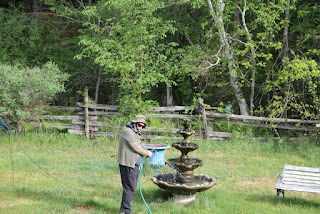 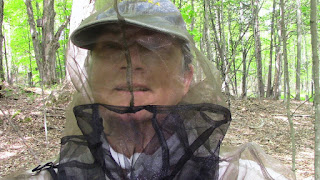 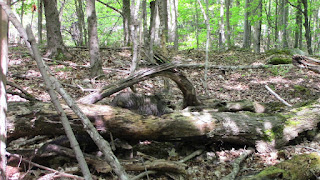 The invasive Spongy Moth caterpillars have hatched out. I found a couple on the back deck. That, and the mosquitoes sent me indoors. We've always been able to sit out there. In a normal year, the bugs avoid the sunny deck. Not this year! I was most perturbed.

...we received the same storm with much needed rain.

Our backyard lilac bush has bloomed, but it is quite faded this year. I put it down to the heat of last week although it is never the most colourful bush.

Lovely pics ... especially the first one and the one of the cat.
(My latest post: Online games and the idea of beauty)

Our mosquitoes are almost invisible, but we sure feel their nastiness.

I hate mosquitoes so much. Do they have a use?

Only one of my 150 tulips has bloomed so far, and it too is yellow. Lots more to come but they are quite delayed here. The lilacs are really loaded with buds, but we're a few days from full bloom. Not seeing any caterpillars yet. I'm sure we're a good week behind you despite our close proximity.

It must take years to grow a tulip with special colours. The bugs, only once have we had such trouble, near a small lake down south, the sandflies were a huge bother.No face masks there as we were travelling with our caravan, but socks pulled up over long pants, then boots, and long sleeves pulled down!!!Your cats, maybe camera shy!!!Ours know when the flea treatment tube comes out and vanish!!!

Oh how very wonderful! You blessed me everyday Jenn

No body checks out spring details like you do.

oh no on the mosquitos being back!

Oh no the mosquitos are back!

I always enjoy your posts Jenn, so much to see. Thank you! I can almost smell those lilacs :)

Your tulips are beautiful. I hope they bloom for you for years to come.

That was one unusual storm, but beautiful in the night sky.

I had standing water left from rain and the mosquitos attacked me when I tried to use it. Now I look like a big pimple. Your husband has the right idea.

The light in the photo of the two tulips is gorgeous! Funny how they can be different one year to the next. Mine are the same, rarely true to the original.

Spring really does give us hope again each year, doesn't it?

Cats run the gamut, don't they, of being good posers! You think you've got them and then they move!

What wonderful creatures you have here. And I love your bug regalia. They are fierce here, too!