British Columbia's a mess. They are making predictions about reopening, but this is only for commercial vehicles. It involves TransCanada highway #1, the culverts being washed away, and bridges collapse. It impacts a lot of people. Nova Scotia and Newfoundland are similarly hit, as well the the UK. Then there is the Omicron variant. sigh.

I was listening and watching British Columbia's Agriculture Minister, Lana Popham. She was talking about how much damage there was to the Sumas Prairie and the food industry. Blueberry farms, all under water. Also, there are flower farms that are devastated.

But, she says the B.C. Dairy Association has estimated a loss of around 500 cattle. Popham says there are also thousands of poultry and about 20,000 hogs that have died. She says she expects to have exact numbers in the next week or so.

#BCStorm update: We have completed an aerial assessment of our infrastructure along the #BCHwy8 corridor between #SpencesBridge and #Merritt, and we’ve found substantial damage – including at least 75 power poles that have washed away. pic.twitter.com/qapRM7edhX

Spences Bridge, in B.C., has been largely ignored, since they are concentrating on giving the biggest bang for the buck in road repairs. Highway 8, which goes through the area, has been destroyed. What you can see on the map are the First Nations communities that have been upended.

Stephen Rice is the mayor of Spences Bridge,  can only get cell service when he drives 30 minutes to Ashcroft. He does interviews twice a day, and explains that it'll be 2 years, if ever, that they can repair the road bed. It has been washed away. People cannot access their homes. There is talk of using decommissioned logging roads, after they refurbish them, to provide a route to their homes. 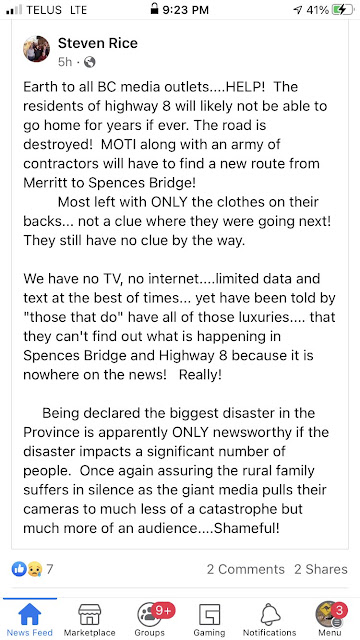 Barb Roden, mayor of Ashcroft, explained the issues to CBC. It is a mess. This is a screen capture of the transportation map. 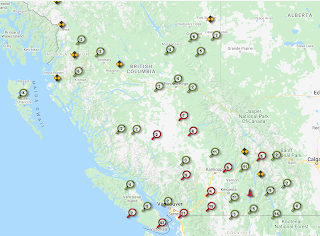 When you read the fine print, you can see that they predict reconstruction to be finished Nov. 2022. 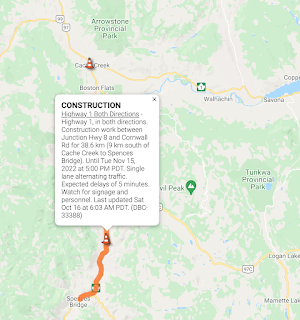 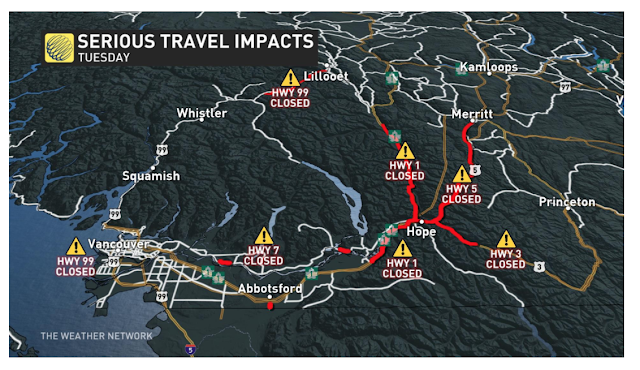 I am grateful to be warm and dry indoors, having put out garbage at 7 a.m. We had snow!

In the meantime, the Nooksack River flows north and floods southern B.C. 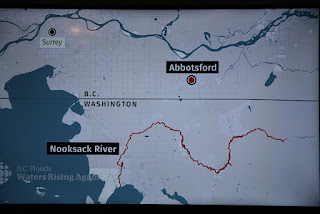 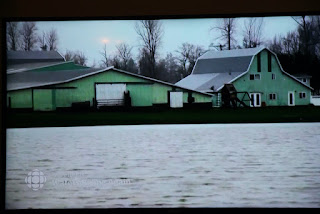 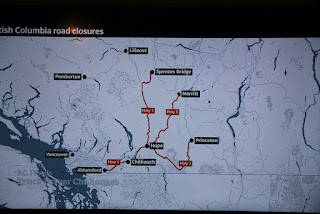 Additionally, 110 beehives were destroyed.There are still more than 800 farms under evacuation, so officials believe the death toll will likely change as residents and operators return. There are about 700 acres of blueberries planted in the Sumas Prairie, part of which is located in Abbotsford, and as with other crops, the full extent of the damage is not yet known.

UPDATE: Dec. 3rd from the B.C. Minister of Agriculture

Poultry: chickens; 61 poultry farms in evacuation zone. Good news: 97% of laying chicken survived. Also, 98% of the turkeys survived.
Dairy farms: 98% of the cows from Sumas Prairie survived the flood. For 48 hours one farmer feeding cows in neck deep water. They survived. The rugby association players cleaned up 100s of stalls, removed stuff from basement. Also, the hockey team has been working like this.

Additionally, 110 beehives were destroyed. There are still more than 800 farms under evacuation, so officials believe the death toll will likely change as residents and operators return. There are about 700 acres of blueberries planted in the Sumas Prairie, part of which is located in Abbotsford, and as with other crops, the full extent of the damage is not yet known.

There are 817 parcels of land registered as farms (Premises ID), with 159 livestock & cattle farms. Several farm families were hit really hard, like the blueberry farms which will have to be replanted.
Posted by Jenn Jilks at 07:17

Labels: bc agriculture, bc storm

I went to Google and found more photos.What a mess, massive beyond anything I have seen, This does not look good for the ski resorts a little further north. We didn't even get a tiny bit of that news down here, the media are all too busy with the Covid numbers,( for little NZ, they are high, going from a smaller 150 to over 200 each day ) and the National Party debacle, the leader, Judith Collins, was rolled, in a caucus meeting , after stripping Simon Bridges of all his portfolios, because of a lewd remark he made almost 5 years ago.It was dealt with at the time. They will elect a new leader today, I wait!!!

It's such a mess, and it keeps getting worse with another atmospheric river predicted for Tuesday-Wednesday.

It is a disaster.

Their supply lines are very much reduced. Alberta also depends on many of their products.

Our daughter lives in Abbotsford.

Wondering if we will get as much snow here in Ontario as they got rain in BC One never can tell the future.

That's terrible, what a mess! I hope they're able to organise alternative access to people's homes as soon as possible.

We've had terrible weather in the UK too, though I've not heard of any roads being that badly damaged

It fills me with sadness. I'm afraid Climate Change and Covid have given us, so far, only the Promo to the real Show. It seems we are helpless, and we can rely only on God and on ourselves.

There was a big piece on BC this morning on NPR. It's terribly sad. What a mess our world is in.