Zack Worthington has suffered an horrible tragedy.  He was a passenger. His right wrist is broken, scapula/shoulder blade is broken, face is broken, nose, orbital bone, forehead crushed. Bleeding from his brain frontal lobe. In a medically induced coma,  and on a ventilator. Doctors stopped the bleeding in his brain, removed the shards of bone. Plastic surgeons will still have to work on the rest of his face but the brain has been #1 priority.  They will have to cut a hole in his neck  with  surgery because they have to realign his jaw and face structure. His jaw will be wired shut. They found that he has a fracture at the base of the skull where there is carotid vessels so they said they were using blue dye to see on a CT scan if it has been damaged which could explain the lameness in the right side of his body. This is serious. 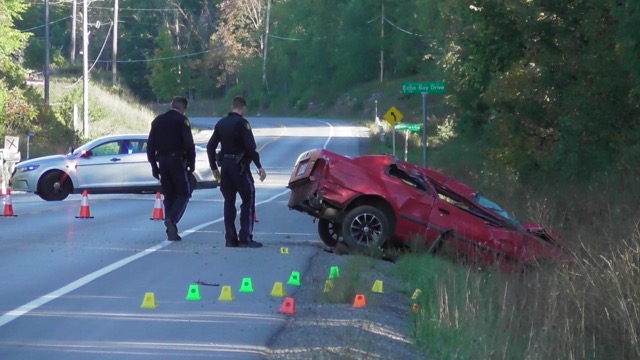 It is the season that deer are on the move. They are moving to their winter yards soon. 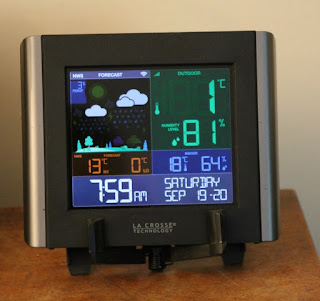 They were there when JB took him morning walk. He called me out. The OPP asked us to stay in, as they didn't want us in the crime scene photos. OK, fine. 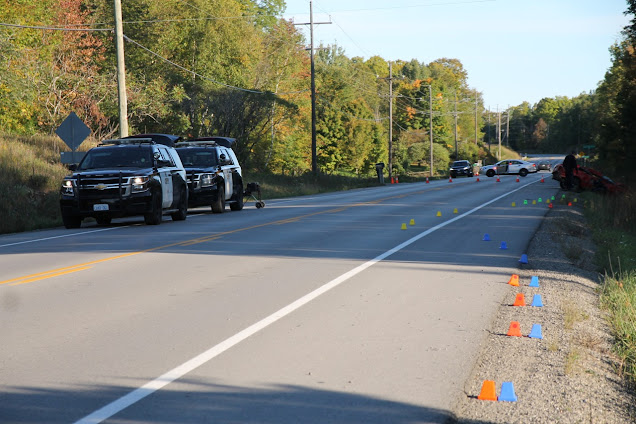 We went indoors, after we spoke with the officer, and I had to figure out how long my trip would take into town. It'd be 6 minutes going this way! Next, I had to text Caitlin, as they were coming for a sleepover. I said not to leave before phoning to see if the road was open. 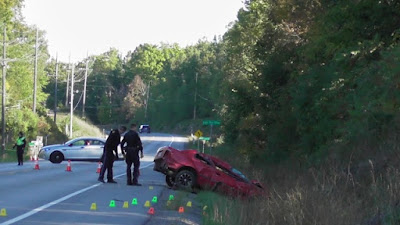 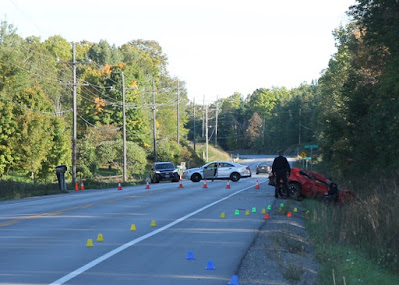 Look at the skid marks! I walked it out and it's about a 46m skid. I looked up braking distance.

9:15 a.m.
I had a massage booked at 9:45, and had to leave early. The police officer told me to go the other way, which I did, around the cones. She said to come and get her if I needed help. The poor woman had been standing around for 4 1/2 hours, by then. The male officers could pee in the bushes!
Firefighters had been and gone, 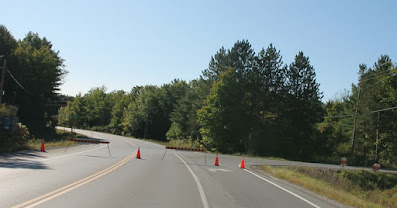 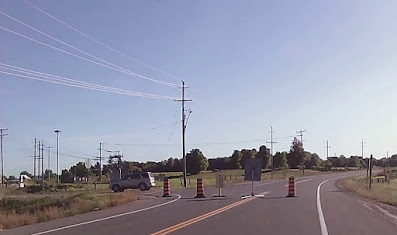 I went the long way around into Perth. They'd blocked the road right in Perth. 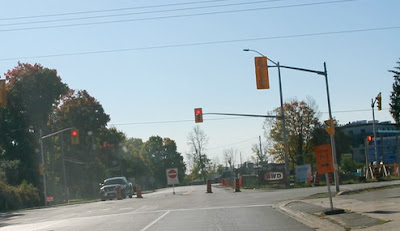 11:00 a.m.
After I was home from my massage, they were done surveying the accident scene, and were having the car towed away. I phoned Caitlin, to explain how she was to come. It is funny pulling around the cones, I could feel people watching me when I did it.
It turns out, it was in the news: a Quebec driver hit a deer at 3:30 in the morning. Two people are being treated for serious injuries. There were two passengers. The 25-year-old man from Quebec was the driver. Also, 32-year-old man was injuries, and a 26-year-old man from Perth was treated for life-threatening injuries. 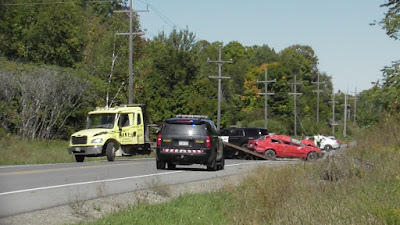 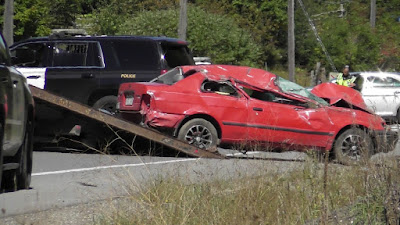 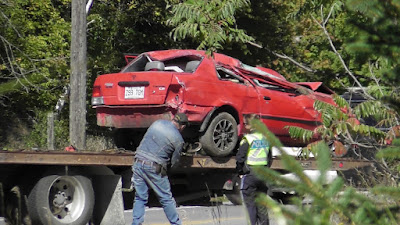 Just as they were taking it away, Caitlin and the girls arrived. Then, the road was opened up. All was well for us.
Honestly, people have to slow down on rural roads. I hope alcohol wasn't involved. The car was totalled. I'm surprised they survived at all. It kinda looks like it rolled. Oh, people.

I went down Monday morning, after garbage was gone. There was some debris, including a spent flare, and a couple of beer cans. 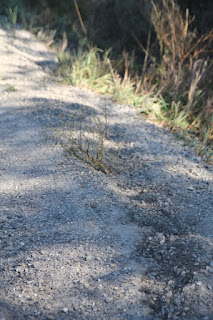 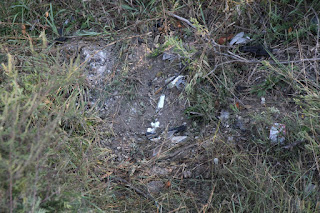 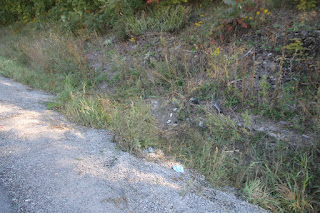 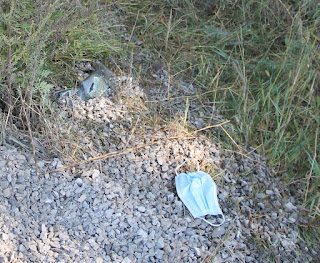 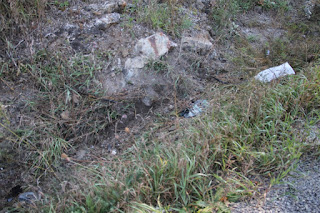 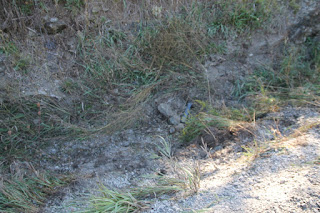 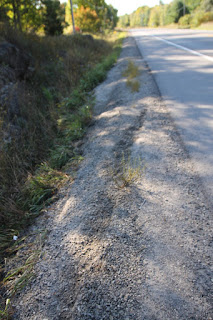 The driver, Matthew Wilson, age 25, of Gatineau, Quebec has been charged with Impaired Operation - Over 80 and two counts of Impaired Operation Cause Bodily Harm. These charges have not been proven in court. The two passengers remain in hospital with possible life-altering injuries.

...life has been a bit boring here and that's fine with me.

WOW! I too am surprised anyone survived. In the park we beg people to slow down because of wildlife. Deer are unpredictable.

It is a shame that people can't seem to use common sense when driving in rural areas .. they are very lucky not to have been killed .. but some how I doubt this incident will stay with them very long .. I am a pessimist when it comes to people and common sense.
I do absolutely love your header picture Jenn ! It is gorgeous !
Thanks for stopping by my blog .. I have a ton of work to do with all the bulbs I have to plant .. I'd better get busy !

I had a friend that was in a car that hit a moose somewhere up your direction years ago. I seem re remember something like 167 stitches to put his head back together and he was told that most people did not survive hitting a moose.

We have had people pulled over on our little road doing 140 kph. Crazy! Too many farm animals as well as deer and other wild animals on the road even here in southern Ontario.

Let me assure you that women can pee in the bush too! It's almost a rite of passage for young biologists doing their first field work in remote areas.

People are in a hurry to go nowhere.

I agree, @David, however in bullet proof vest, with guns on your hip?

Wow, sorry to hear about this.

That is amazing! I'm surprised anybody survived that crash too.