Things have been weighing heavily on my heart. We decided to go and see some snowy owls.
We left the house about 8:30 to get the 10:30 ferry to the island.

A hawk, was our first find. 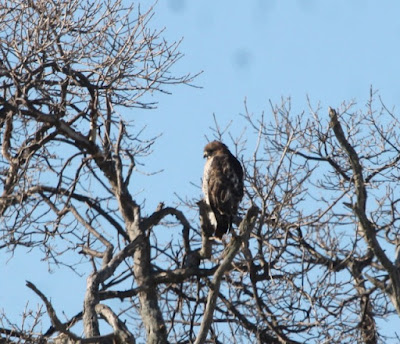 Of course, there were hundreds of geese and ducks. As we ate lunch, they took off en masse. Then, when were leaving on the ferry, they did a fly by. Stretching their wings, perhaps. I didn't have the energy to get out of the car and film them. 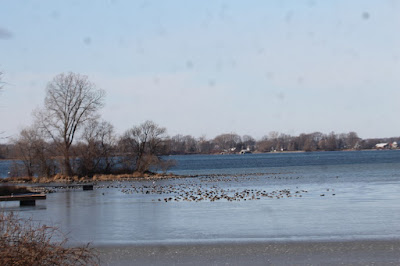 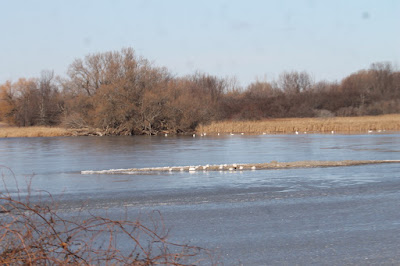 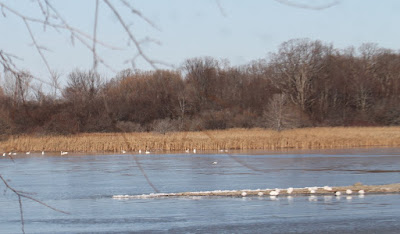 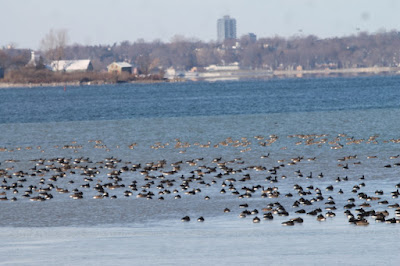 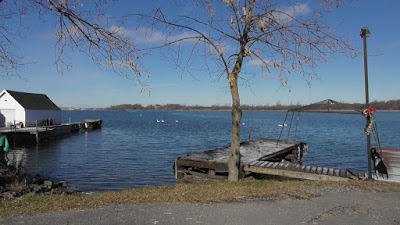 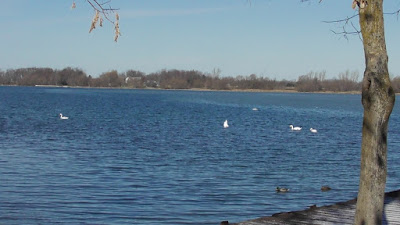 There were a few swans. 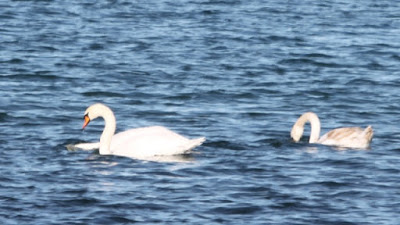 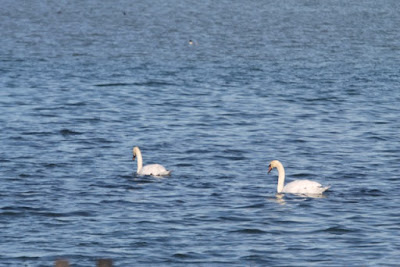 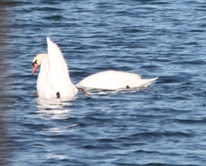 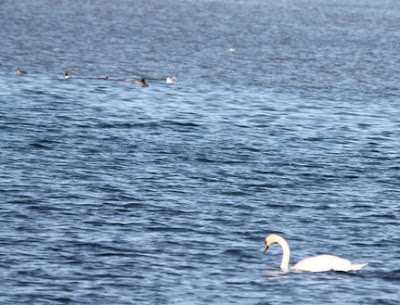 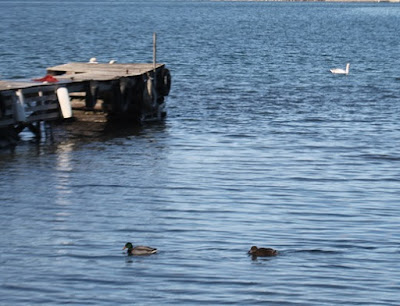 This is my favourite photo, the water looks so soft. The mallards came in close for me. 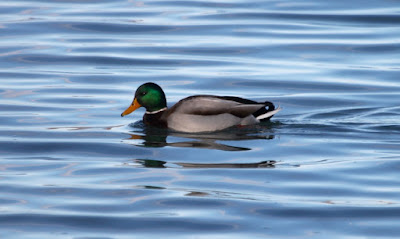 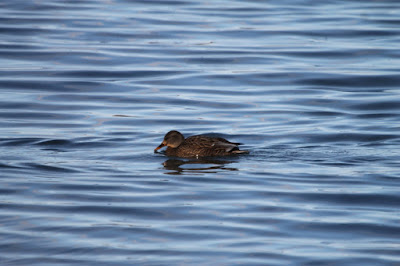 I am having a difficult time zooming in and focusing. The pair of eagles soared in circle over our heads. 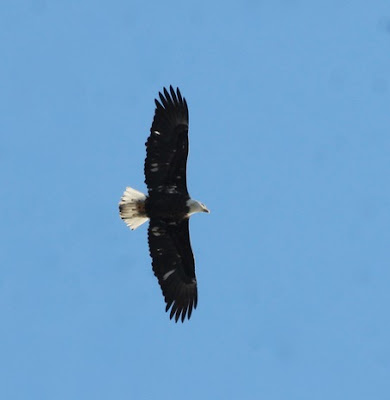 This raptor I could see over a field, and it kindly came over us. I'm going with Northern Harrier, on a quick search, How to Identify Hawks , but I'm sure I'll be corrected if that's wrong. It's a distinct pattern. 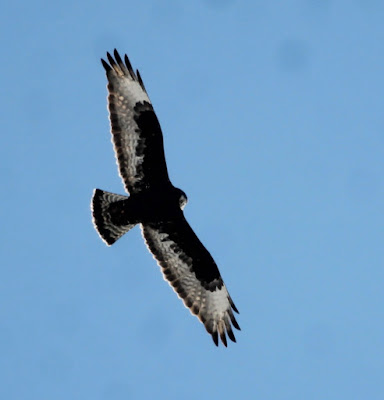 The shore was a bit chilly. A single gull... 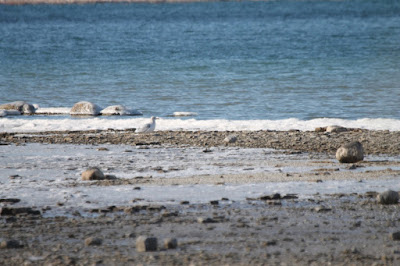 After lunch, a man cleaning up in front of his home near the pub asked if we were birding. I said yes. "Did you see any snowies?"
"No, none." I was ready to go home.
He suggested we try a particular road. He's lived here 60 years, and he knows everyone who lives there. He knew we were from away! Off we went.
In a forest, along the side of the road, some really lousy photos, but you will have to trust me. There were 5 long-eared owls. It was impossible for me to focus quickly enough, but you get the idea. I think I might have to get some long-distance glasses. I've needed them since gr. 4, but the progressive lenses are awful for this kind of thing.

It's been confirmed, on Ontario Owls (FB), that they are Long-eared Owls! 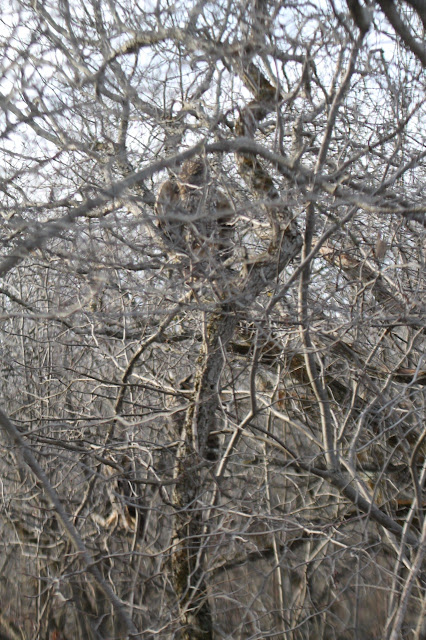 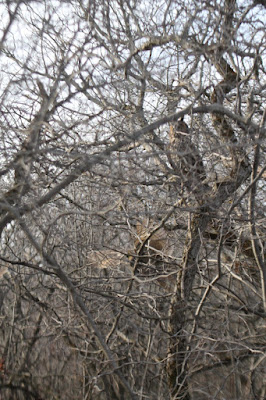 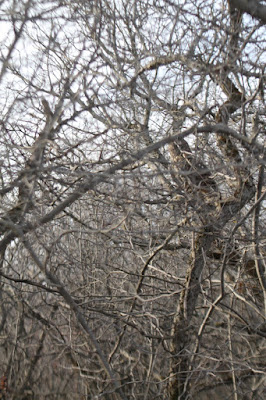 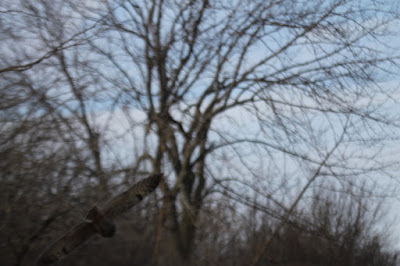 A little further down, a 6th owl. 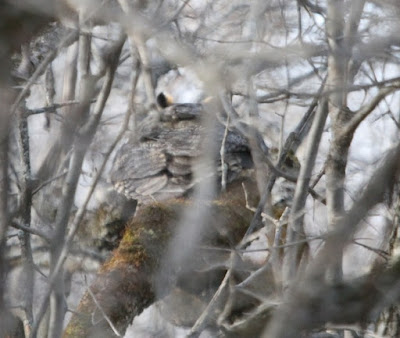 Those were our finds. We tried, and couldn't get on the 2:30 ferry. It was full. We toured around some more, bought a newspaper, I took some photos of the icy pier, we got onto the 3:30 ferry. Not only am I disappointed, but defeated.
More successful birders can be found here:

Hello, it sounds like your had a nice outing and some great bird sightings.
the Great Horned owl is an awesome bird. Love the eagle and swans. I have more luck finding birds when I am not really looking. Great post! Thank you for linking up and sharing your post. Happy Saturday, enjoy your weekend! PS, thanks for the comment on my blog.

There is a facebook page for Ottawa Field Naturalists. Lots of people from my area are members. They post so many great photos of owls, particularly Snowies.....I have yet to see one. Well, I lie. About ten years ago we had one come swooping down to grab his lunch RIGHT IN FRONT OF US! We have owls around us in the woods, I hear them talking, I hear them flying around at night, but never see them.

Hope this made you feel better, wonderful nature.

The swans are beauties!

I think you had a successful day of birding even without the Snowies!

You gave it a good try.

Hello! Nice and interesting post on your birding day. You saw many birds. Long eared owls are awesome.

I'm sorry that you felt disappointed and defeated at the end. It can be disappointing to have photos not turn out the way that you want, but it seems like you had a good day overall. (Maybe I misconstrued your remark.)

Wonderful series of photos.
I think it is really great to see photos 1,4 and 13.
Best regards, Irma

Hello Jenn!
What a pity you didn’t saw the Snowy Owl! Love this bird!
Great captures of the beautiful swans and the Eagles!
Thank you for visiting my post and for your kind comment!
Enjoy your new week!
Dimi...

...this looks like my neck of the woods, but I rarely if ever see an eagle.

I think it is two years since I have seen a hawk. Gret to see they are still around somewhere :)

That is an amazing hawk! WOW! And so many owls! It's my dream to see one in the wild this year! Beautiful photos!