Busy times in the forest

In all our travels, well, our trip to Wolfe Isl., I've neglected reports of things at home!
I have several reports.
Raccoon sighting! It's unusual, as they should be snoring soundly in February. 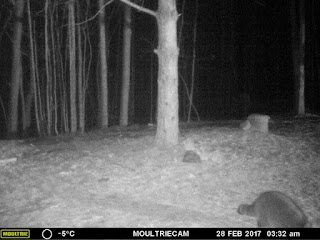 Firstly, Feb. 24th, the owl was at his favourite tree in our back 40. I found a pellet. Owls eat prey whole, then throw up a pellet of fur and bones. In the pursuit of science, I let it dry, then opened it up. You can see a little shoulder bone sticking out of one end.


I posted it on the owl FB site, said my owl caught a 'mouse,' and was educated by a wise person: Amanda Guercio who took this in university! (Who knew?)


Perhaps more interesting than a mouse, the prey item was actually a shrew! I suspect Northern Short-tailed (Blarina brevicauda). Their skulls look superficially like those of small rodents, but if you look closely at the jaw bone in the centre of the photo, the premolars butt right up against the base of the incisors - in rodents, there is a large gap between them called a diastema. Shrews also the lack zygomatic arches ("cheek bones") present in other mammal skulls. Really neat find! 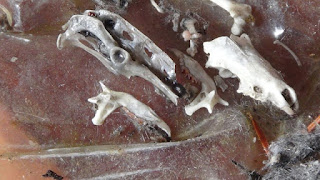 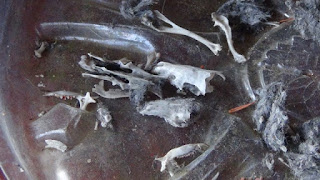 Next, I found one small deer antler. Not the conflagration I was banking on! SIGH. 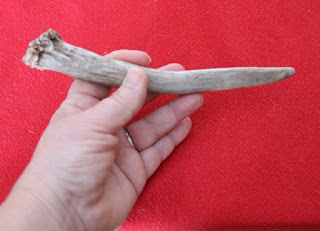 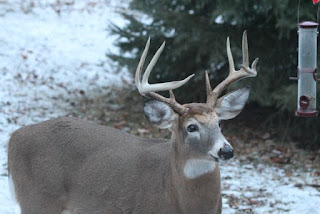 We had a major dump of rain last week. Annie wasn't thrilled, but was happy to sit in the box under wraps. RAIN. In February! Yikes. 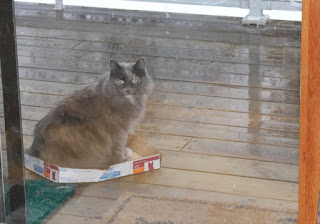 The deer are still out and about. They hunker down on the pine needles, under the trees in the sun. 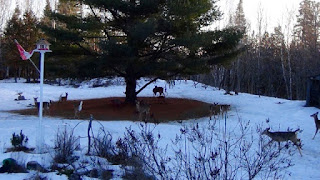 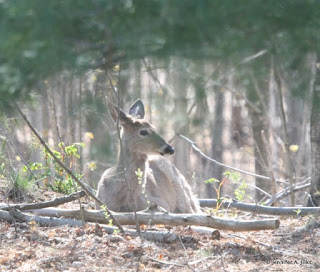 The wetland is nice and wet. Thankfully. My bridge to the wetland was navigable finally, albeit under a bit of ice and water. This bodes well for the lakes, which the wetland feeds. The trees have been attacked by porcupines or woodpeckers. 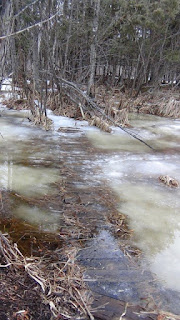 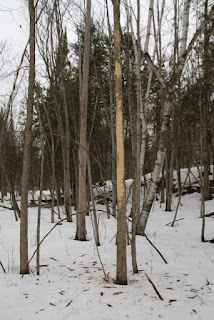 Now, not for the faint of heart. I hadn't been down to the point, since there was ice on the paths. What a mistake! There was a deer kill at the point. I could have set up the trailcam and watched them. There isn't a bone in sight. Simply blood and fur. They process it all rather well. I would suspect it is the deer with the broken leg, as they cannot take down a healthy deer.

I'm trying to pin point the timing, but I cannot admit to being down at the point in a week or 10 days.
They are hungry coyotes, feeling a little more full. 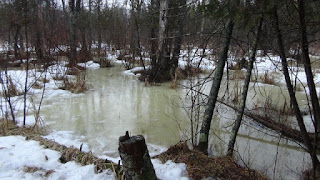 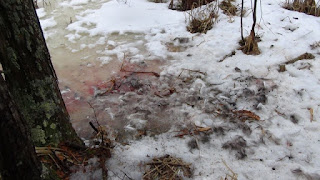 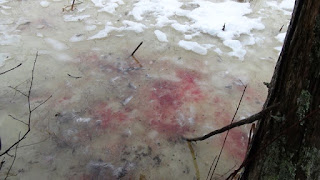 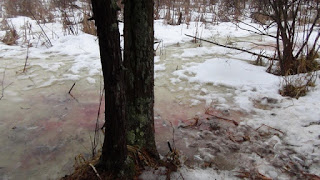 Love the deer and cat photo ~ thanks,

i always enjoy seeing the deer - i know all about the circle of life but it sure is hard to "see" it!!!

Predators are pretty thorough with a kill, and what they don't take, smaller scavengers and critters will finish off.

Wonderful photos Jenn! It has been such a strange week for weather.
Have a great weekend!

Annie is wise, and the kill? That is nature, however we look at it, they all need to survive somehow. But I feel sad for those who cannot escape. Keep safe if you venture down to the woods today... or tomorrow.

The natural world goes on -- all of us must eat! You really do live in an amazing place -- your own Nature Park. I always enjoy your tours.

Lovely winter photos and soon it will be spring!

Goodness, what you don't find in the forest, would love to take a walk with you!

Yikes, what a grisly find. But in nature everyone has to eat to survive. - Margy

There are know-it-alls (speaking of the shrew) all over. ;)