What a lovely celebration!

I remember some horrid Christmases, and have to try to forget them. They pop up in my memory, and I have to laugh. I think the difficult years make one appreciate the better ones more. The year my girlfriend brought us a box of food, as a lawyer had convinced someone to not pay child support in December. We didn't have a tree. Mom sent a cheque and I bought some things for the kids. It builds character!

We spent so many years traveling to various grandparent units, it was complicated. We moved to Ottawa in 1981, from Toronto, and had to travel back to Toronto, Kitchener, Bala, over the years.

One year, we took the kids to Kitchener to visit with our in-laws. We booked a hotel. Sadly, the swimming pool, which was part of the bribery to have them leave home, was booked for a private party on Christmas Day. That was a HUGE disappointment... The kids were about 4, 6 and 10 years old.
Then, my sister-in-law (a single parent of one) was preparing a delicious brunch, which was held until the in-laws arrived. The in-laws were not there until after 11:00 a.m, our step-MIL was head nurse at the hospital on a night shift, and my kids were starving. They ate candies from dishes. It was such a mistake. They ran around my SIL's apartment like fiends. We should have given them breakfast in the hotel dining room! I can laugh about it now, but I felt dreadfully guilty for years!

This is why I want the kids to enjoy their Christmas at their home.
We had Christmas with the kids last weekend. I saved the photos until today. They had a sleepover. We'd had snow overnight - the previous night, so JB did the driveway. I haven't left the house in a month, with my virus, and he went out shopping and bought us some lovely red towels! 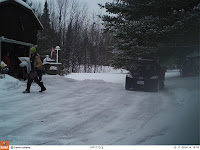 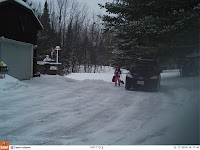 We had our traditional bundt carrot cake. The girls decorated it. Crackers and silly hats!

We're at the point where I have to ask permission to take their photos. This means that they have time to prep for a photo. Our dear, sweet, sugar-and-spicey girls!

In the meantime, Daisy continues to climb the tree. I don't know if this is her fault, but the top small section won't light anymore. The angel, which used to have big wings and a light bulb in the back (see the top photo), has seen better days, too. It might be time to let her go. It was my parents' angel, and has to be as old as I am! 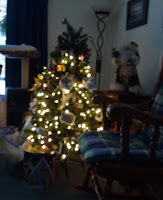 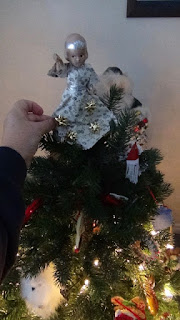 I try not to think of the bummer Christmas's. There were one or two but not a bad as your's. so you will have a good day that will be very quiet. Get rid of that virus! Okay. I don't want to be worrying about you.

Hari Om
Happy Christmas Jenn - sorry to hear you are still 'under the weather'; sending a bit of "POTP" your way and Greetings for the remainder of your day. Huggies, YAMxx

Christmas used to involve travelling for us too. We still travel the 7 minutes across town to spend the night with the kids.

When my kids were small, we too have our share of unpleasant memories but looking back we realized that they were just one of those days that happened to normal families. Enjoy your girls as much as you can.

Daisy is a natural tree climber, so of course she wants to climb the Christmas tree.