I did a Book Review: Owls of the U.S. and Canada –previously. There is so much to learn! It wasn't a good resource book, though.

I have a few owl photos of my own, simply a matter of chance and happenstance, for the most part, other than the Snowy owls. (There are some known spots)

I haven't managed to find any owls in 2016, but the year is young. I'm not getting any younger, though! I have avoided the ones, in south Ottawa, where everyone goes. It's just not right, tramping on the fields!
We had a Great horned owl build a nest across the highway in a previous year. I spotted a Barred owl by the frogpond, when on a walk with Daisy, and we had a Saw-whet owl on our front porch (the Sharp-shinned hawk killed it), and a Barred owl was killed by a car. I brought it home, to take photos. [A poor wee feathered body by the side of the road]


I spotted this information on the Facebook owl group. I asked Jeff if I might use his photo, as I have a hard time remembering the sex of Snowy owls. It is easy to figure it out, if you can remember it! I said I would give a donation to The Owl Foundation, where he volunteers in exchange for using his photo. He kindly said I need not make a donation, but I believe in being fair.

Now, hubby and I have driven miles and miles this year looking for Snowy owls, but in vain. Hopefully, we will see one. There are a couple of places where you are assured to spot them, but that would be easy! The horrible unethical photographers are baiting the owls [like this story], which results in them becoming inured to humans, as well as posing other problems, and that is bad.

Jeff Jones‎, who volunteers at The Owl Foundation...

The difference in size between a male and female snowy owl is quite large. In this photo we have both a male and female hatch year snowy owl. Notice how much smaller the male (left) is than the female (right) Also notice the bars in the plumage. Both male and female snowy owls are born with bars, with the males bars slowly diminishing with each molt until he is all white, or very close to it. The males chest is much more white as well as his cap, which is a good indication to the probable sex of the owl if you are viewing it in the field. You can also notice how dense the female's bars are in comparison to the males.

The female was actually put in this long flight training cage to help the males recovery speed up. With her in there as well we are hoping he will want to try flying to build up some muscle quicker to show off so to speak. With luck I should be driving the male up to Sault St. Marie for release in a couple weeks. 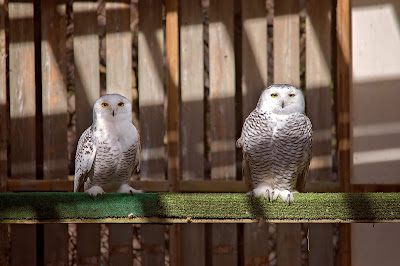 Great post, I love all the owls. Happy Sunday, enjoy your new week ahead!

They're such beautiful birds, with such a rich variety of them out there. Perfectly evolved, too.

Yes, the unethicals are here too. they don't care about other photographers. they don't mind getting in the way and if they scare the bird away tough luck.

We hear owls once in a while, but they are so far back in the bush there's no way to find where they roost. - Margy

Hari OM
loved the comparison of cameras last post and of course owls are ever lovable!!! ... I do tend to think that wild-life photography has become the 'big-game hunting' of the new millennium and despite most folk being quite attentive and ecology-minded, there are those idiots who will do anything for 'that money shot'.... YAM xx

I have a thIng about owls. You are lucky to see so many. We have great horned owls calling over our house at night sometimes and it's quite a treat to listen to them.