Family wedding –it was a chilly one! 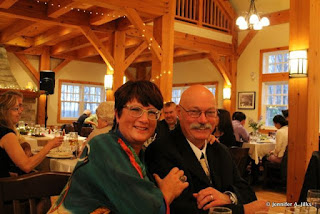 Temple's Sugar Bush - it was an outdoor one. It was only a half-hour drive for us.
It was longer for those unaware of the detour.


Hubby's cousin's son. This is hubby's aunt, who has 5 adult children, raised in the military and transferred around the world. Betty tells us of being popped into a 2-bedroom apartment in Halifax with 5 kids, once-upon-a-time. 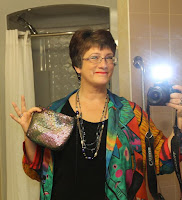 Hubby wore his hatching-matching-dispatching suit. The only one he has left. While my mother was failing, her house had an infestation of moths. I found them later in her unused flour, she was quite the baker. They destroyed his other business suits, but left him the black one. We often meet his family at these family occasions.

I refrained from taking photos during the ceremony, unlike some attendees who actually moved around to do so. There were lots of cell phone photos, too! This is my selfie from 2013 at the previous wedding. It's not about me –so I could wear the same outfit!

Just as the ceremony finished, while they were signing the register, it began to rain. Hubby's cousin thought a chair would be a good remedy. Then the danged photographer demanded a group photo, as the rain came down harder. It's a shame, as it was a great hair day, but it's not about me! His cousin took our photo for us.

I liked the thumb/fingerprint guest register! 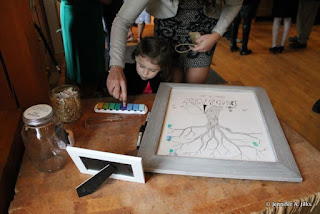 Kelly (in blue), the MC and elder sister of the groom, was great. She sat at her mom's table. We sat with the groom's father. Another one of those well-orchestrated family weddings with in-laws and out-laws! It was a lovely venue. Bless their hearts, they figured out how to give hubby a non-dairy/eggs/yeast meal.

There was one natural ham, in the bright green jacket, and the spoons on his eyes, who was born to the bride after the last family wedding in Feb., 2013. 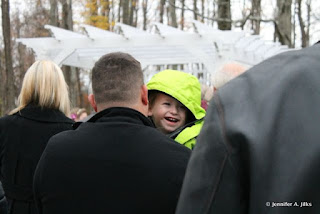 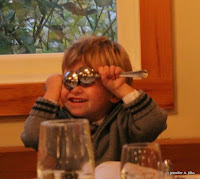 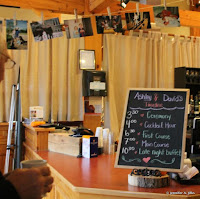 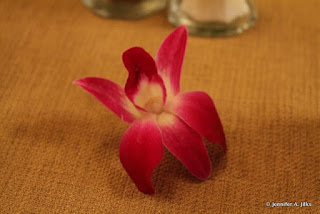 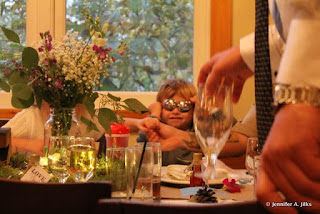 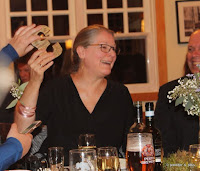 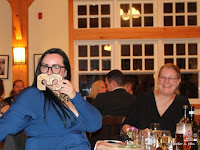 A lovely family wedding and great opportunities to catch up with relatives.

Looks like a wedding with all the relatives there, so glad you went and enjoyed it all, specially the special food for Mr J.

Terrific shots! I've only been to one outdoor fall wedding, and fortunately the weather was ideal.

Hari OM
Aside from the sprinkling for the ceremony, all looks joyous and fun and everything it ought to be! YAM xx

Well, at least the reception was inside. By look of people in heavy jackets it was cold and couldn't have been pleasant.

You look great! Congratulations to the family

Looks like they were lucky with the weather. Nice setting. - Margy

We had a family wedding at the same venue. It's a beautiful place for a wedding. It was much the same kind of day too! Thankfully our actual ceremony happened in a church