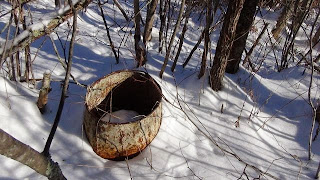 I found some rubbish, for Rubbish by Roan #35. A meme for things that are old.

I was out walking in the wetland and found some rubbish. I haven't a clue what it is/was.
Back in the old days, when this area was settling (1816), they divided it up into parcels and around 1980s or so, a firm was hired to mark off the properties.

We hired the same firm to mark out property boundaries. It cost about $2000 ~3 years ago, but it was worth it. We now have modern bright markers where lichened moss on stumps formerly showed the property line.
Each property has a right of way between the land one owns. Brilliant in Scotland, for example, but rather ridiculous here, as it's the middle of the wetland. If one cannot get a road in, why bother with the land? Our right of way runs down the gully, which is impassable as the wetland has grown over, and small trees block it. In fact, even since the 8os, when they cut down the trees, it's very hard to distinguish these rights of way. 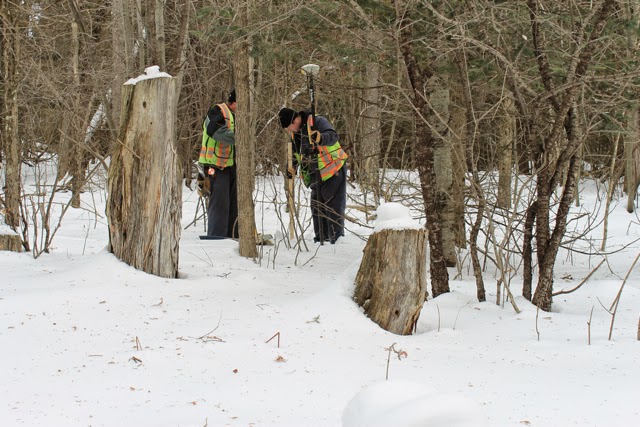 We had the property marked on the upper and lower boundaries. It helps to know which part of the wetland we own! (I think!) 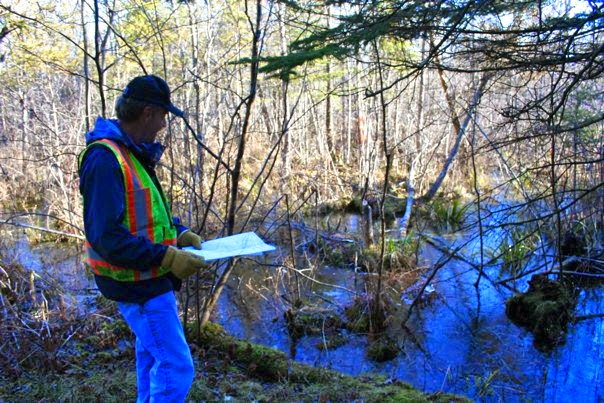 I love the second and fifth photo when expanded...

It is amazing what people have abandoned...
And I should be getting out for some exercise in the snow...

I can see that getting complicated fast!

Surveying technology has become high tech. It's much easier to mark your territory.

I wonder what could possible have been going on!! I guess we'll never know.

ah! but no one may infringe on you from those spots, Jenn. Nice

You are so lucky to own a piece of beautiful nature.

Thanks for the link to Rubbish Tuesday. I have a great post to share there next week. - Margy

I would think it is good to have your land marked off. If anything to keep hunter off of your land.. It looks like a cold day.. Enjoy your Wednesday!

Looks cold, but a beautiful place to walk. Love the old rusty bucket and the fence.

I thought I had left a comment, Jenn, but it seems I didn't. Sorry about that.
Looks like a wonderful walk.
Luv, K