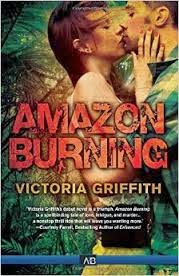 This is a fun mystery. I quite liked it. It is about a young college grad, a journalist working for her father. The setting and locale is beautiful, a hot, steamy jungle, especially with snow falling outside my window!

It's quite a good read, with lot of action. It's recommended for YA, but this middle-aged woman enjoyed it! Normally, I don't like novels about young, beautiful women who seem to have it all. Their whole lives ahead of them,  and life is perfect. They don't and aren't, of course, but I find it hard to identify with the perfect creatures some authors create. What made a difference in this novel is the knowledge the author has about the region where the story takes place, as well as the challenges our hero faces.

I very much enjoyed learning about the Yanomami Indians and their cultural practices, aside from their loss of habitat and ecosystems. For those who are concerned about the environment, this group of Aboriginal Peoples very much illustrates the huge impact of 'civilisation' on humans, flora and fauna. I learned quite a bit about the region. It is a familiar story, unfortunately, what with the issues in western Canada regarding the pipelines. Our Aboriginal people are demanding that the Crown recognize fairly negotiated treaties in British Columbia.

Victoria Griffith is the author of the award winning non-fiction picture book The Fabulous Flying Machines of Alberto Santos-Dumont (Abrams, 2011), which won numerous awards, including the prestigious Parents’ Choice. The book was recently translated into Portuguese for the Brazilian market and was also released in audio book version.
Before becoming a full-time author, Victoria spent twenty years as an international journalist. During that time, she had fun writing on a wide range of topics, including Brazil’s Yanomami Indians, architecture, space exploration, the human genome, and the growth of the Internet. S  Victoria lives in Boston with her husband and three daughters.

I found it interesting doing a bit more research on this issue. Illegal gold miners, ranchers, strangers transmitting diseases, depositing poisonous mercury, raping the people and the land, this impacts the approximate 32,000 Yanomami Indians. Their territory straddles the border between Brazil and Venezuela, making it increasingly difficult for them to fight for their territory across two nations.

The BBC World Service has done a story [BBC Story] about a young man, David Good, raised in the US and in Yanomami territory, who went back to find his Yanomami mother. It's an interesting idea of culture.

Good review, Jennifer. Thanks for pointing the book out!

When you read a book you do more than read. You learn so much more by checking out settings and authors.

This sounds like a very eye-opening and great read. Thanks for the review and doing your research which I found very interesting. As you say, an all too familiar story.

I appreciate the background research you do for your reviews. I studied the Yanomami at college and given the author's expertise, I'd be more inclined to read this novel.

This book sounds more like a New Adult novel than a Young Adult novel. YA usually has a teenaged MC, whereas NA is college age through recent graduates, especially romances.

How very good of you to do extra research and pass it on to us. This sounds like a mystery where the setting is almost a character. And I loved how you related this mystery to what's going on in western Canada. Thanks for reviewing, Jenn!