Daisy and I went skating on the frog pond! 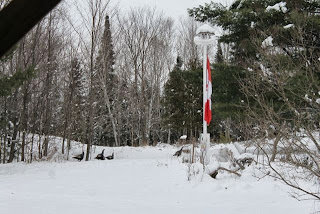 It's one of those iconic rural stories, skating on the pond.

Now, my skates are really rusty, but I thought I'd try it. I spotted the turkeys in the back yard, and thought it would be good to get outdoors.

What the heck. Thing is, the flat frog pond wasn't so flat after a night of cold, cold temperatures. There are lots of deer tracks in the forest, and a wolf ambled by, too.

I found deer tracks every where. Including a spot of blood on the snow in our backyard, on the Honourary Rick Wilson Grassy Knoll. Rather ironic. A potential kill, not quite killed.
The dratted turkeys had been walking across the pond. The deer, as well.

I pulled on my old skates and tried to skate. My feet hurt, but the cold, fresh air was bracing. It was terrible skating, though. Very bumpy.

Daisy is such a great moral support! Buster was sleeping. She thought she'd take a walk on the wild side! 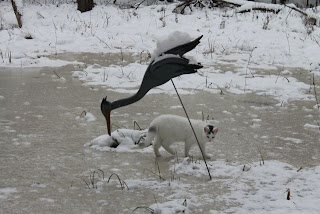 But the wetland is NOT frozen. Beware those who travel on it.


Back up at the house, I was trying to adjust the tree lights. I'd done a really bad job, but then the winds blew over the star. Guess who was my helper?!

They are unusual cats, but they love walking and follow me all over our 16 acres.

Your cats are gems. She's in the perfect spot amid those shining lights.

Good on you for getting outdoors to skate and read about the critters who have been visiting you.

Love the cat enjoying the Christmas tree! At least it is one that is firmly rooted and won't tip over.

What fun - so jealous of your ice! Lovely shots.

I loved seeing your lights on the tree. You are ready for the holidays! And so are your kitties.

That does look like a bumpy skating rink in the forest … adventurous of you to give it a try!

Have never lived where it is so cold -- it seems like something out of a fairy tale to me.