And still he continues. The photos are a hoot! He pretends it is an aerodrome to get around the rules. On Oct. 2nd, he was ordered to take it down in 90 days. I wrote about it before, but I really believe that these people like to flaunt the laws. It is a game. (See my previous post: not only Paul Bak, but former Red Leaves owner, Ken Fowler, appeals zoning by-laws.)

After the 'boathouse' was ruled illegal, here is the decision, he still has a video marketing it. In fact, the video flaunts it.

The video flogs the illegal boathouse. The house itself is huge.
He fully intended to build another structure, which would add to the value of the property, that he clearly intended to sell. 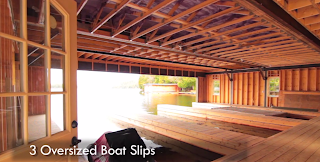 He mistakenly refers to 'The Muskokas', when that is the wrong term. There is only one Muskoka. It is a region, the region of Muskoka, or Muskoka Lakes.

It shows a sumptuous lakeside manor, complete with several shots of the tree-lined vista and a floating structure referred to as the “boathouse.”
Subsequent advertisements for the property labelled it an “aerodrome” and “float plane hangar.”
Tis beyond me why he would need to add bedrooms and living areas, with the house well back from the shore, as required.

59a Burgess Rd. -- Rosseau, Muskoka from ICONICA on Vimeo.

The timelines are ridiculous, as Paul Bak tries to get away with disrespecting municipal laws and the environment. Time after time he was told it was illegal. He applied in 2008, only to have it refused. He did not take 'illegal' for an answer. 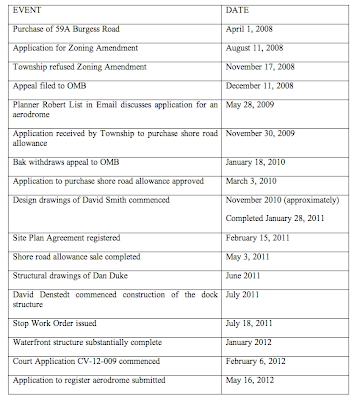 Planner, Robert List (R.G. Planning Ltd.), suggests they call it an aerodrome in May 2009, despite the owner not having a pilot's licence or an airplane.

Bak's withdrawal of an appeal to the OMB was done in Jan. 2010. I wonder why?
It is shameful to me that the design drawing were commissioned from David Smith in 2010, despite the illegality of it all.
Dan Duke (Duke Engineering -Huntsville) does drawings in 2010. Dan Duke has been in the news before. More G8 malarky.

And what builder in good conscience could begin construction (2011) when they should well be aware of the environmental laws? David Denstedt does. He's with Muskoka Barging.
What builder ignores a stop work order (July, 2011)?


Wouldn't the real estate agent know this is illegal? Muskoka is littered with boathouses on shorelines, ruining the fragile ecosystem, such as riparian zones.
Too many places exist on the waterfront, grandfathered from current laws protecting the environment and its wildlife, demonstrating a lack of concern for this earth.
These people all colluded, ignoring the municipal zoning by-laws, those in Seguin Township, by-laws that prohibited this building from being built in the first place.
I'm just saying that we rant and rave over the ridiculous backstabbing, nepotism and back door deals in the government, but it exists everywhere. In boardrooms, on public boards of directors, in municipal, provincial and federal places of business.
Posted by Jenn Jilks at 14:54

The letter of the law can be twisted to oppose her spirit!

How horrible. Should be a special place in Hell for those kind of people.

In the UK if you are told to take somthing down you do or the local council will and you get the bill. Abouttime they did that don't you think