Tails of the goldfish pond or One Fish, Two Fish, Orange Fish, Goldfish 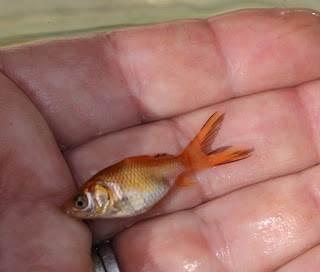 Friends and family know of my fishing tales. For a long time I've had tropical fish. It all started with my Uncle Bob. Not a real uncle, but family friend. He showed me how to manage my guppies in my wee fish tank, a Christmas present from mom and dad when I was in my teens. My ex-late-father-in-law raised tropical fish, including an 8" Percy Piranha. He gave me some fancy dancy Cichlids, once I was out of university and settled (1979!).

Over the years I've had various tankfuls and enjoyed them.

In 2006, I inherited my parent's home. Our three dime-store feeder goldfish went in my parent's large, two-tier pond.

We moved to Lanark County, and brought Shirley, our remaining fish, with us. Shirley was lonely, and I bought two Shubutkins. Calico and Not Nemo had a grand time with Shirley. Oliver went fishing one day, directly in the fish tank, and scooped out Not Nemo. Back down to two fish. Shirley became ill, and we bought Shirley Two.


I had-dug a pond last year, and bought a 2nd-hand 8 x 10' liner, and Shirley Two went outside with Calico. Now, the pond was going along swimmingly. Calico swam over the Rainbow Bridge last month (we're on a roll), but Shirley Two has 4 new friends, ditch fish from biologist Heather Lunn. (Long story!)

I repaired holes from the field mouse. Put water plants in from the bog. Buy local, or transplant locally. Pretty safe, I thought. Startingly, I ended up with some new fish. They must have been in the muck from the bog plants. Identified by Brock, a real naturalist keener, and one of our Murphys Point Park employees, said they are Alewives, sort of a herring, that truly doesn't belong here. Sigh.

Today, out fishing with Buster Brown, I noticed a flash. It was an orange flash. OH NO! The dang goldfish, prolific things, surviving in a ditch, ought to be able to reproduce in a goldfish pond, but we don't have space. I was worried about this. We had planned to buy a bigger fishtank when some bills are paid in fall. But this had me daunted.

I looked closer and realized that not truly goldfish, these are the size, shape, and form of the Alewives, but with orange colouring. I think there is a Ph.D. research paper here somewhere, but I have sworn not to take any more courses! 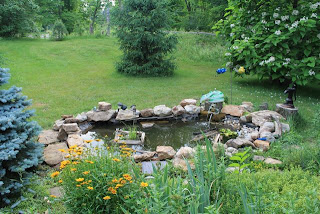 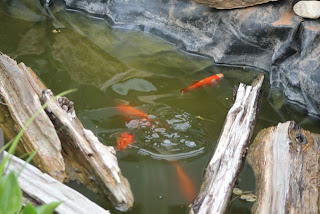 You do have a lot of fun! The alewives are an interesting story. Do they live in soil for some stages or did they get scoop3d up in the bog soil water?
You're a wealth of information!

I enjoyed this post Jenn. I enjoy looking at fish in the ponds I come across, they are so relaxing to watch. I once had a dentist who had two tanks of tropical fish in his waiting room, how clever of him. By the time his patients went in for their dental work, they were very mellow :)

Hope you have not created a monster here...I had to laugh at the resolution to not take any more courses...sounds like you are prone to do research!

how nice to spend time with you!

What a beautiful pond. I used to love having fish, but I could never keep them alive... except for guppies. I was good at guppies. :-)

The teachers at my elementary school got a grant to build a pond and nature habitat on our campus. It was a wonderful teaching tool, and quite spot to go just to relax for a few minutes between classes. Love all your fish. - Margy