Now, many will recall my creation of a goldfish pond last year. Mostly hand-dug, I did bring in the big guns to remove the last 3 microwave oven-sized rocks. My neighbour didn't charge me for his time on his backhoe, so I gave him one of my books, as his wife does caregiving work!

With the pond - I am making progress, except over the winter our mice friends chewed several holes. I've undug one side, removed rocks and patched two holes, found two more yesterday.

It was a nice day, the humidity was much less, and my feline supervisors came and went. I used our shop vac to remove some of the dirt where I had to dig out. I never use it otherwise, it came with the house.

The pond is very healthy. I used some pond flora from the frog pond, beside our meadow, and it seems to have brought some creatures I didn't anticipate.

Firstly, the water striders, then the water boatmen, added to the flavour of the pond. The frogs, of course, have been delightful. Jeremiah has been great at reducing the Water Striders, who went from one in first of Spring, to several. Then, I noticed wee, wee babies. They grew and suddenly there were a couple of dozen, where there were only a few. Well, I must report that the 5, oh, no, 6 frogs in my pond have seem to have done their work.

In the meantime, the 6 goldfish are thriving. I am looking for a neighbour with a pond, perhaps give away a few. They grow to the size of their container, and my pond is around 600 - 700 gallons!

I have noticed wee crayfish larvae, as well. Some blood suckers here, too. No photos, don't want to touch them at all or gross out the sensitive! 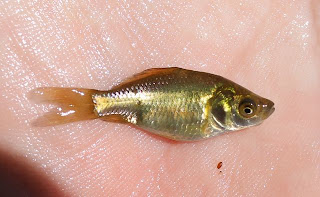 The newest 'additions' have been the Alewives. There must be a couple of dozen, now. I tapped the knowledge of our MPP student employee, our tax dollars at work employing a real keener and committed environmentalist. He tells me that my minnows are Alewives, or a species of invasive herring,
They look like Shiners. They sell them as bait. I believe that they came in as eggs on the mud from the flora I transferred from the frog pond. When I moved the plants last fall, the frog pond was dry. All of the minnows had disappeared, as well as the Pond Puppies. The raccoons go around and clean up the dead and dying bodies as the pond dries in August. Currently, with our drought, the pond is totally dry. But the eggs are there, for sure!

Alewives are perhaps best known for their invasion of the Great Lakes by using the Welland Canal to bypass Niagara Falls. Alewives colonized the Great Lakes and became abundant mostly in Lake Huron and Lake Michigan. They reached their peak abundance by the 1950s and 1980s. Alewives grew in number unchecked because of the lack of a top predator in the lakes (lake trout were essentially wiped out around the same time by overfishing and the invasion of the sea lamprey). For a time, alewives, which often exhibit seasonal die-offs, washed up in windrows on the shorelines of the Great Lakes. Their control was the impetus for the introduction of various Pacific salmon species (first coho, and later the Chinook salmon) to act as predators on them. This caused the development of a salmon/alewife fish community, popular with many sport anglers. Alewives, however, have been implicated in the decline of many native Great Lakes species through competition and predation. 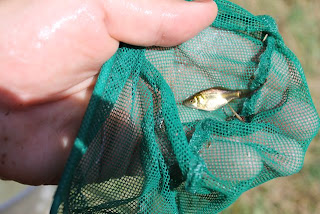 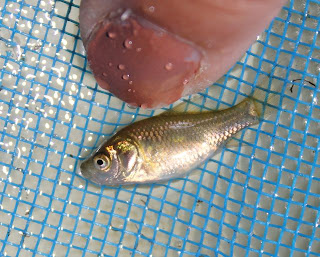 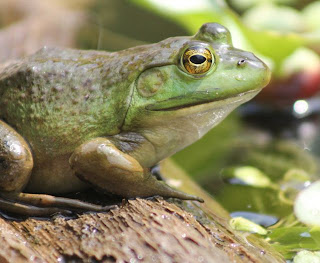 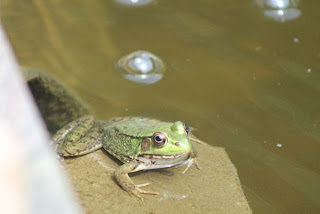 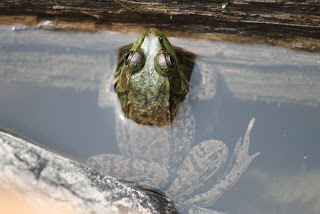 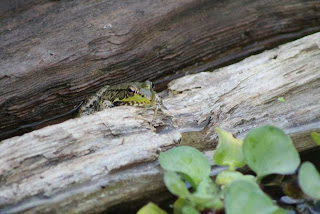 pond.dnr.cornell.edu/nyfish/Cyprinidae/common_shiner.html
Common Shiner (Notropis cornutus) Common shiners average about 2 1/2 to 4 inches long; some reach 8 inches. Their color is basically silvery with a dusky back.
Posted by Jenn Jilks at 19:45

Terrific story of your pond! How many science lessons would this be? I see a whole unit here.
Good post with great info.

I am thinking of putting in a pond, but it will be a concrete one - my son just poured one for his house and it is lovely! I am all for low-maintenance! 700 gal! That is a huge pond!