Defensive driving - it used to mean something else

I drove home from the local general store, and some yahoo passed the guy behind me on a curve in the road.

I slowed down to turn into my driveway and the idiot ended up swerving into the other lane, as he didn't anticipate me being there, or any oncoming traffic. There was a loud sound of brakes, as he successfully avoided me.

What a jerk. I wanted to follow him into to town and get his licence plate and ID. I was too shaken up. I knew I shouldn't be driving. Too many people in too much of a hurry. I hope his passenger gave him what for.

You know it is bug season, and that means critters are on the move, trying to escape the bugs. Most of us who travel rural roads regularly know to scan the ditches for deer. Many of us choose to follow the speed limits. And it is a choice some do not make at their peril and the peril of those in oncoming traffic. Not an accident, it is an incident caused by stupidity, much like drunk driving.

We know a lot about traffic incidents. It is wise to be prepared. The statistics are clear about peak-risk times.

Wildlife collisions:
On average, there are 14,000 reported vehicle/wildlife collisions in Ontario per year. Eighty-three % of these collisions happen on two-lane roads outside of urban areas. Most occur between 5-7 a.m. and 5-11 p.m., with 87 % occurring in good weather. Yet, they drive like maniacs...

Sometimes, no matter WHAT speed, if you encounter a moose you are in trouble. They are enormous. They step over the barriers like it was a picket fence.

A reader wrote, misunderstanding my point:


I trust that you are not implying that my father died due to driving recklessly on the highway that night. I can assure you that, he was not. My father never went over the speed limit, not even by 5 at night. He was a frequent traveller of that highway. He just happened to be at the wrong place at the wrong time. And happen to clip the back legs on a moose which then threw it on to the roof of the car, with most of its weight landing on the drivers side. Thus crushing the roof on to my father, snapping his neck instantly, before rolling the vehicle. 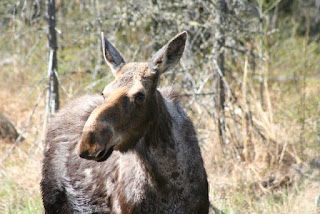 By The Daily Press

The collision occurred at approximately 10:30 p.m. on Highway 11, in Hislop Township, south of Matheson.
The collision resulted in the closure of the highway at the location for several hours.
He is the second Timmins resident whose life was taken in a collision with moose along that stretch of Highway 101 in the past month.

Central Ontario had a bad time of it last month, May weekend:

May 27 – 11:00am – Car vs. Motorcycle on Highway # 17 North Bay – both had minor injuries that were treated at hospital and then they were released. The driver of the car was charged with Careless Driving under the Highway Traffic Act.

May 27 – 12:05pm – Car vs. Car on Valois Dr., in Mattawa – on injuries and one of the drivers was charged with Following too Close under the Highway Traffic Act.

May 27 – 1:06pm – Car vs. Car on the Bypass near Sheriff Ave in North Bay – one driver had minor injuries and one of the drivers was charged with Failing to Stop for the Red Light under the Highway Traffic Act.

A case of road rage on Highway 401 near Cobourg, Ont., culminated in a high-risk police tactical unit takedown on a crowded beach at Sandbanks Provincial Park, and several charges. Ontario Provincial Police said the Sunday incident began at about 1 p.m. ET on Highway 401 just west of Cobourg. Two cars were heading east when one allegedly cut off the other.

A man is in critical condition with life-threatening injuries after his Jeep rolled over at the Highway 417 on ramp at Holly Acres road. Police, firefighters and paramedics all responded to the crash at about 6:13 p.m. and found the man trapped in the vehicle.

Wow, so many accidents. I feel so sorry for the animals. If only these people would just slow down some. I see the same kind of idiots on my way to way every morning.. Speeding, passing illegally and just being jerks.

There are too many jerks out there with licenses and cars.

Glad you are OK!

Have a GREAT Week

You missed two of my favourite signs: one on a cottage driveway near here: Never mind the DOG, beware of GRANDMA!
The other at a friend's farm:
Please drive with care, we have no pets to spare!