Biodiversity, sharing the earth, and species at risk

After the business part of the meeting,
Tim Wood, who used to work in our park, gave a lively speech on Species At Risk.

Tim spoke of the great movement of the 1990s, when we realized we were killing animals off on this planet, but I have been lecturing students about these topics, and creating curriculum activities around this topic for all of my 25 teaching years. I am glad that this tradition continues.

Common Ground
Sharing the Earth with species at risk
by Tim Wood, who now works for the Leeds-Grenville Stewardship Council

Globally, up to 40% of all living organisms are at risk. Since Europeans arrived in Canada over 30 species have become extinct in Canada. Over 600 species are at-risk, in Canada. About 200 in Ontario are at-risk. Unfortunately, living in Lanark County's 'Back off government' and Muskoka's landowner's association's mindset, Ontario's Biodiversity Strategy is crucial for the survival and biodiversity of many species.

Habitat loss
Wetlands were thought to be useless, but they absorb frost, get us through drought, and clean up water systems. In Ontario, 90% or our original forests were cut for agriculture. Clear cutting of the day. Ghosts from the Day - Part 2 A royal commission in 1898 found that Georgian Bay fishermen were using undersized nets, and exceeding the number of permitted nets. They estimated that more than 2000 nest were strung in the Bay. This combined with effluent pollution by lumber barons created ghost towns...
No trees meant dust bowls, which blew soil away. The canopy is so important to critters like flying squirrels.
Pollution – for example, the General Motors foundry EPA clean-up in 1990. Stone studied a snapping turtle in Akwesasne, which they analysed 1987. Its fatty tissue was 3067 parts per million of PCBs. This is 60 times worse than toxic waste. They found a masked shrew, with 11,522 PPM, and couldn't imagine how it could survive.
Land Use change, fragmentation of habitat. Highways, dividing landscape, e.g., 401, is a horrible way to treat our critters. Thank goodness some places are improving roads. Clear cutting.
Alien, invasive species – Brockville is the ground zero for invasive species. Emerald ash borer. Zebra mussels (3 billion/year); wrong nutrients for predators; lamprey, 40kg of native fish; Asian Carp (voracious eaters); purple loosestrife; giant hog weed.
Persecution: There is much misinformation about critters like: snappers, wolves or snakes. Citiots go to the country and kill snakes. Many fear snakes for no good reason. In cottage country, they did not understand, much like the bison.
Road mortality. One study of a 40-km section, over 80 days in E. Ontario, they found roadkill of 6000 animals. Turtles, snakes, porcupine, frogs: wet humid evenings seeking different habitat, birds of prey, red-tailed hawk. On our stretch of 500m we have had two porcupines killed this past week. In summer we were averaging 2 or 3 a week. Deer collisions are high in Mississippi Mills. Safe driving guidelines.


Sliding scale of species who are in danger of extinction, evaluating species at risk

TURTLES:
In Ontario we have 8 species of turtles, of those 7 are at risk:
Northern Map turtle, Blandings, Snapping Turtles, stinkpot turtles.
This was the mother of all turtles, spotted July, 2009, on Long Lake, Bala, Muskoka.

2. Species of special concern: the bald eagle (they steal food from osprey, as they are larger). Eastern wolf; extirpated in Ontario. It is the Big Bad Wolf syndrome: farmers thought threats to livestock, and there was a bounty for pelts. Currently, it is the coyote who is being persecuted in cities. They will be next. Many loathe reptiles and amphibians, for some reason.

3. Threatened: Blandings turtle, lake sturgeon (fishing, roe), massassagua rattlensnake.
Massassagua rattlers in Georgian Bay – I'll never forget the blasting when they put in new highway 11 roads back in the day. The rattlers were on the move in our forests all summer. All of our neighbours were on the lookout for them, and killed them on sight. Loss of habitat and clearcutting destroyed Native lifestyles, as well as animal. Silt flooded fish breeding grounds and destroyed the economy. Also threatened, due to persecution; gray ratsnake. 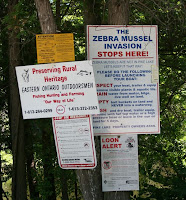 Tim made an excellent point. We know role of a particular species in an ecosystem until they are gone. For example, eastern wolves in Yellowstone Park. Once they were extirpated the elk and coyote populations were out of control. Invasive plant species went wild, and increased their invasion, too.

You make a very valid point - and your research is extensive! Glad we have people like you on the side of the environment!

Lots of interesting (but sad) information here about species lost and endangered.
You are a true environmentalist, my friend.
And thank you for the video clip. I've never seen a turtle sticking that far out of its shell. Fascinating.
K

we could use more people like you in the world Jenn! Where I live, progress (construction) is taking priority over the natural habitat. I keep thinking the geese and wildlife must be so confused at what's going on. (Where did my wetland go?)

You're so right - without protecting the biodiversity we have and learning to live alongside it, earth will eventually die...

VERY, very interesting!!! But, I must say, I wouldn't miss snakes at all...ANY snake. I really enjoyed the read here today. Quite an education I rec'd by stopping by. Thanks to you.