Tonight I was a cheap date 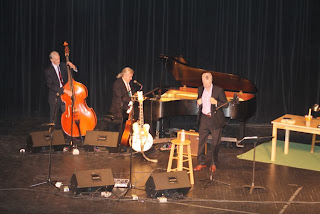 I love our high school theatre in Perth.

A wonderful set of shows, through the Perth Performing Arts Committee.

Unlike larger city venues, we can find the cash to support the arts in Perth, pay NO parking fees, and travel the 5km into town for a great concert. When we were both working, we'd often go to the NAC for concerts, but they are pricey if you are retired!

We attended the Alcan Quartet in September. They were much fun. An intimate setting, the Mason Theatre is just fine. 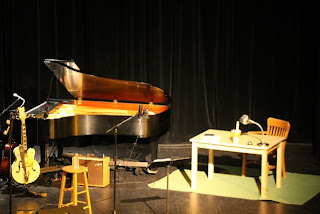 This week it was Stuart McLean's, Fall Tour 2011
Vinyl Cafe in Perth!

It was a great performance, as always.

I used to listen to Stuart McLean on Peter Gzowski's Morningside show, while home with my newborn beginning in 1979. I graduated pregnant and went from being a keen ECE student, to mom. Morningside was my contact with adults, while I did Home Day Care for special needs children, being able to be a stay-at-home mom with my daughter. My supervisor was one of my classmates, who worked for Children's Services for Toronto. Those were the days!

I loved motoring around the house, radio on, playing with the kids, doing arts & crafts, shaving foam play, pudding art, while Gzowski interviewed anyone who was anyone in our Canadian treasure of talent. Stuart McLean was a story teller on his show. My favourite was the time they lost it and couldn't stop laughing. My second fave was the cricket show.

The great thing about Morningside, was the introduction to various artists whom I might have never met, devoted to my kids, and being a full-time mom. I was out 4 nights w eek: leading the kid's church choir, sp.ed ADQ classes Tu/Th, choir practice for the Ottawa Choral Society on Wednesday.

Gzowski put the focus on Canadian musicians, as well as politics and Canadian culture. I miss him. There is a gap in CBC, with many Canadian artists going under the radar as more popular international artists are featured, rather than Canadian.

Stuart McLean's stories were masterful.
McLean has been doing his Vinyl Cafe on CBC Radio, CBC 2 on Saturday mornings, CBC 1 on Sundays at noon. He has written books, they've created CDs of his Dave and Morley stories.
I've since used his stories with my students. They appeal to all ages. They helped us understand how to craft and shape a story.

Finding the address of a prize winner, by trying to get a pizza delivered to them, since they were on dial-up and using the phone line.

That said, we had a grand time. McLean has evolved from journalist, storyteller, to performer. He is a professor emeritus at my alma mater, Ryerson University. But his talents are incredible, as he treats the audience like his friends, and establishes an intimacy with his faithful million listeners every week.

click here to learn more about Whitehorse's music
Posted by Jenn Jilks at 23:43

We're going to see him in Huntsville. Just love listening to him every Sunday on CBC.

Stuart Maclean aweome show. I take him in when he goes through REd Deer.
I also like reading his books.