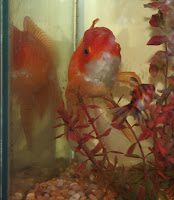 It might be crass to add a water treatment, especially with floods in Manitoba and Quebec, but we all seem to benefit from being near water.
We live in the middle of a provincially protected wetland, with a bordering buffer zone where we, and our neighbours, cannot build!
The natural pond is delightful and calming, aside from 3 million mosquitoes, but I like hearing the sound of the water.

It makes up so much of our bodies, for some of us certainly at particular times of the month!
But this is a good news story for Shirley. I've had some trouble with the tank!
My dear goldfish Shirley, is the only one left of three I bought in 2004, and she is huge with many tumours.

The myths of cancer tumours, that all are fast growing, that all will kill quickly, are not true.
I have lumps and bumps and can empathise with Shirley.

Shirley, and her sister, lived in my late mother's pond in Bala, Muskoka. A raccoon or something took the 3rd in 2006 when we moved to Bala. The goldfish loved sitting under the waterfall, with the water rushing across their bodies.

My original pond pump put water through a large frog-shaped system, spewing water and adding oxygen. The raccoon liked to take it away, and put it out onto the lawn. Maybe we fooled it? 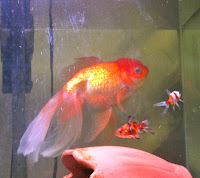 My boy, Oliver, managed to eat one of the Shubutkins I bought to keep Shirley company. Not that I didn't try, he managed to break three tank lids. Finally, plexiglass did the trick. 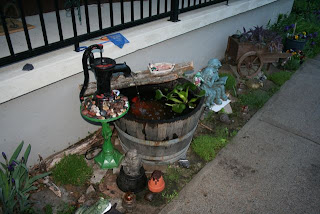 The Shubutkin, Calico, began nipping at Shirley's fins, which made the tank cloudy with the bacterial rot. I can't win!

I have placed Shirley outside in a half-barrel, with water dripping from my old pump. It sounds wonderful, and Shirley seems pleased. She keeps it clear of any bugs and toss the odd one in for her!

I like the picture of Shirley in the pond with the frog. I hope she survives for a long time. I have never had fish as pet as we are away too often with no one to feed them.

I'm impressed with your dedication and interest in your fish.

Shirley is a fine name for a goldfish!