Which generation are you? 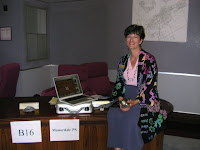 Lots of talk about Baby Boomers...doom and and portending gloom. I'm on the fringe of this generation.
Those serving in WW I, coined by Gertrude Stein about American writers: Fitzgerald, Hemingway. Came of age during the war.
My grandmother was new to electricity and indoor plumbing. My mother was new to going out to work. Our dads didn't talk much about the war. They didn't provide many role models for the dads of our generation. They were there, but they were emotionally inaccessible. I would predict that PTSD is part of what hurt many families in the past. It is a complex weaving of life experiences.

My generation spear-headed the movement for midwives, giving birth with husbands present. My generation of dads changed diapers, and fed expressed breast milk to their children while we were out taking courses to upgrade, doing volunteer work, night shifts, or networking to keep current.

I was upset, as my generation has helped move us into the age of technology.

My video of JB singing M-I-C-K-E-Y M-O-U-S-E to his granddaughter as we Skyped is a classic way we've learned to integrate it into our lives and use it to our advantage.
My generation of parents uses FB to keep in touch with adult children around the world. With extended family, in-laws and step-in-laws, my kids have learned to 'like' my videos and our photos, with settings geared so that 'friends of friends' can view this digital archive of child development. In this way, grandparents in other countries and climes can check in on grandkids!

My son-in-law got on Skype on my computer so that granddaughter could visit with the other grandmother, when they spent two weeks with us.

I'm proud of our generation. We are eating better, exercising, running marathons (well, not me...!), travelling (ditto!), and making a difference in the world helping support one another, and contributing to society.


Public opinion rarely considers the needs of the next generation or the history of the last. It is frequently hampered by myths and misinformation, by stereotypes and shibboleths, and by an inate resistance to innovation.


What are you proud of in your generation?

I'm generation Jones which I had never heard of until just a few months ago. The guys older than me were at risk here in the USA of being drafted.

Just one small thing. The US energy industry is being run by Generation Jones. I'll bet 80% of my co workers are within three years of my age. We entered the industry starting in about 1975 and the door shut in 1982 when the energy bust started and no more people were hired for years.

Personally I get tired of the Generation X whining about the olders not getting out of the way. Hey we have to make a living also.

Interesting post describing the different generations. Baby Boomers are indeed an interesting bulge in the demographics, still ruling the roost after all these years. :)

Jenn: Here I thought I was a baby boomer, I better be silent about what I am.

I must be a lost generation or a generation of searchers. I can't find myself in your time line? But I did enjoy your outline of generations. Sounds like you have another book in there.