I like to understand my region. More research on the why and wherefore has demonstrated how much the geology of an area influences the flora and fauna.

I was teaching rocks and minerals (Grade 4). I wish I had time then to research it. I was given an assignment of a gr. 4/5 split class.


From THE ONTARIO CURRICULUM:

Where farmland exists in Lanark County, whales once swam in arctic waters. Clams lived on the ground we walk. Shallow, with tropical seas, 25-30 m of water covered the land. Fossils are all that is left.

Sand deposits dot Lanark County, with quarries being a common sight. Sandstone, dolomite and fossiliferous limestone are present, as well. Corals, bivalve brachiopods lived once on this sea floor, giant squid-like cephalopods with conical shells. They all lie silently, waiting to tell their story.

This short history was inspired by the field trip on October 28, 2007, when members of ...geology of Lanark County with Professors Allan Donaldson.

The last ice sheet to cover Canada reached its maximum thickness and size about 20 000 years ago. Southern Ontario was buried by ice about 1 kilometre thick, that originated in Quebec and Labrador, until about 12 000 years ago. The tremendous weight of the ice pushed the Earth’s crust down some 400 metres.

As the ice sheet melted, great volumes of water rushed to the sea. The level of the Atlantic Ocean rose and salt water flowed up the St. Lawrence and Ottawa valleys, and over the eastern part of Lanark County about 11 000 years ago. The whale skeleton found near Pakenham, when a farm well was being dug, is evidence that marine animals once lived here in the arm of the Atlantic Ocean called the Champlain Sea. The surface of this glacier fed arctic sea would have been at a level just above the present day tip of the flagpole on the Peace Tower of the Parliament Buildings.

A swamp is a wetland community with little peat development that is dominated by shrubs or trees. A marsh is a wetland without much peat that is dominated by herbaceous plants that are floating, submergent, or emergent. Swamps and marshes are common across the county. Bogs, fens, and poor fens are wetlands underlain by at least 40 cm of peat—and thus, they can also be called peatlands (White, 2010).

We have marshes on our property, as well as a couple of areas of bog. Once the water freezes I'll be able to take a snowshoe around. My chest waders have come in handy, too. But I await my birthday for that GPS I have my eye on, as well as the OPP to finish their target practices! 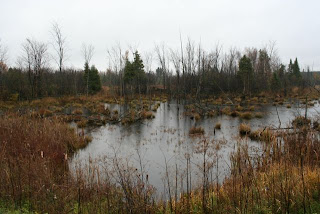 Flora and Fauna
The flora and fauna interests me, heavily influenced, of course by the bedrock. We know so much more now about ecosystems. The Canadian Shield is acidic. However, the glacier deposited acidic glacial till onto the more neutral limestone and sandstones. You can see in the valleys and crevasses boggy wetlands where the bulrushes grow and silt and clay has washed off of the limestone rock up above. Our deer constantly walk through this bog leaving a bit of a trail. The deer quite like our grassy meadow down in the valley, but their feeding trough lulls them in.
Having just moved here in mid-September, I shall look forward to exploring more of the natural flora  next spring. The 2006 version a list of a full list was made available on the www.lanarkflora.com web site.

Some of the Lanark County specimens ... are of interest from a historical point of view. The first known collections (1861-1867) were made by John Kerr McMorine—a clergyman and amateur botanist who lived and collected in Ramsay, west of Almonte (see Ross, 1984). --in White, 2010

The Ottawa Valley: Lanark County as a microcosm - Paul Keddy

A Place in Time The Natural Resources of Lanark County

Mineral and Aggregate Resources
Posted by Jenn Jilks at 07:25

Wow, what a lot of information especially on the interactions.