Karen McGhee has had to resort to sending out information, as well as writing letters to the editor,(p. 7) in order to clear up lies and myths surrounding this project.  While property prices are falling on the Moon River, due to rumours being spread, and fearmongering by the public, the economy will suffer. Rumours, such as the dam depleting fish stock on the river. (As if!) (Download the 2009 Fish Stocking List by clicking here. PDF)


Or that the falls will be 'a trickle', as if this will be good hydro dam management and produce power!

We visit Bala businesses as much as possible. We choose to eat here in town, shop when we can, but those visiting the falls, bringing picnic lunches, are not necessarily shopping here or giving any stores their business. The project is set to begin after Cranfest, when many stores are closed if not full-time, then weekdays. I am so shocked at the attitudes of locals, as many businesses depend upon having a clean environment. This project could bring an added boost to a small, dying little town. Instead, locals are getting fired up, and cluttering a beautiful town with signs.

Moon River runs to Georgian Bay, and while pollutants from 2-stroke engines continue to fall into it, the fish population is still healthy and will not be impacted by recreating and rebuilding the hydro dam.

Most of the local politicians have been publicly silent on this issue. It is only recently:

And amongst my friends, many are silent, too, fearing the wrath of the strident, vocal opponents.

Yet, Ontarians elected a premier whose platform included Green Energy. It is up to all of us to do our part, however small.  A Green Energy Act for Ontario: Executive Summary (PDF) 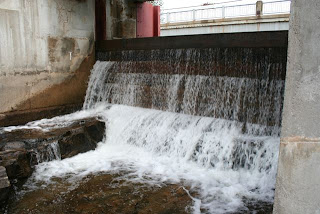 From Karen:
There have been a few developments in the project over the last couple months, that I would like to update you on, namely the following:


2.       Swift River Energy has retained the economic experts at the Centre for Spatial Economics (C4SE) to complete an economic impact study of the potential impacts to the local businesses and economy for both the 12-18 month construction period and the long term operations, in response to a request from the Township and local businesses.  This work was started in early August and we are hoping to get a final report by the end of September. 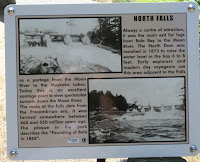 3.       The Township of Muskoka Lakes presented its comments on SREL’s responses to its elevation request.  We were pleased that the vast majority of the concerns were considered to be sufficiently addressed.  The remaining handful of issues will be discussed fully in a written response by SREL and Hatch Energy’s Professional Engineers and Scientists by the end of this week.  SREL, in the meantime, will be addressing some of the more troubling comments made by Township staff and Council at the regularly scheduled Council meeting on Tuesday August 24th.  It is hoped that all misinterpretations and remaining concerns can be cleared up during that meeting and the upcoming response report.

It has also come to our attention that there has been some of the misinformation circulating about our project, and has resulted in some unsubstantiated fears and speculation by the community.  SREL has prepared the attached briefing notes for community leaders such as yourself, to provide you with some of the facts about the project.  We hope that this document will help in you in any discussions you may have with interested parties.  However, please remember that I am available to answer specific concerns at this email or by phone (provided below) and our website provides a multitude of  information about the project and the regulatory process we are currently following.

Meanwhile, throughout the province there has been increased interest and media cover with respect to the provincial electricity grid and the impacts of the Green Energy Act that was passed last year.  I have provided the following links of various Toronto Star articles for your information if you are interested.  In addition, John Spears, wrote 3 great articles on the Ontario electricity sector or August 7th/10:
Regards,
Swift River Energy Limited (SREL)

I think if you can point to other 'dam' projects in the past, none of these fears are valid. The main concerns in any damming project is that a lake is formed and it reclaims land - often property owners aren't thrilled about taking acres of their land and covering it with water. And of course the downstream regulation of water can be an issue if you have high demand users below the dam. Overall however, the benefits of damming, I believe far outweighs the bad in most cases. W.C.C.

BTW Jenn - I understand this is a 'Waterfall' project, but often the same issues come up. Mainly my point was just look to other projects and I think most people will see there is nothing to fear for the local area and after the build is complete it will be GOOD for Muskoka. W.C.C.

It's true, W.C., in fact it has been a dam for many years. Originally built to regulate the Lake Muskoka water levels, there was a working dam which hydro decommissioned. They are updating it, realizing its importance.

I think thoroughly discussing stuff is great. As long as it is done civilly.

I'm finding that there are lots of misconceptions and misperceptions out there about energy and power in general, including some of my own views.