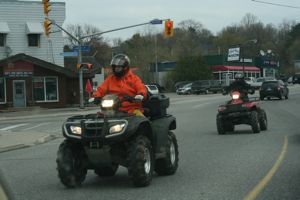 
10. Moosomin man, 37, dies after being thrown from ATV
Source: Regina Leader-PostSASKATCHEWAN - A 37-year-old Moosomin male died after being thrown from the ATV he was riding Tuesday morning.The man, whose name is not being released until next of kin is contacted, was driving an ATV on a grid road two kilometres north and eight kilometres west of...

At 6 p.m. on Wednesday, Steinbach RCMP were called to the scene of the crash on Two Rivers Road, where a one-seat ATV loaded with children had careened off the dirt-and-gravel path. Injured in the accident were the 13-year-old driver and his passengers, a 10-year-old girl, a two-year-old boy and a one-year-old infant. None of the children was wearing a helmet.

Hospitalizations related to ATV accidents in Canada rose 25 per cent to 4,104 in 2004-2005 from 3,296 in 1996-1997.
Snowmobile-related hospitalizations de­creased by almost 20 per cent.
Source: Canadian Institute for Health Information In Manitoba, there have been several deadly ATV crashes over the last two years.

A 26-year-old man died and two people were taken to hospital in serious condition following a collision of two all­terrain vehicles near Grunthal. The four­wheeler driven by a 26-year-old wearing a helmet rear-ended a second, stationary four-wheeler being ridden by a 30-year­old couple, neither of whom was wearing a helmet.
An 80-year-old Manitou-area farmer was found dead after being pinned under his ATV while check­ing his crops. Family found the victim at about 6:30 p.m. after he failed to return home on time. He was not wearing a helmet.
A 43-year-old man was killed in the RM of Alonsa. His body was found lying on the road and an ATV was in the water-filled ditch.
A 20-year-old man was killed when his ATV crashed into a police vehicle owned by the Shamattawa First Nation. The driver and his two 13-year-old pas­sengers were thrown from the ATV. None was wearing helmets, RCMP said.
A 19-year-old man from Carman was killed when the ATV he was driving north on Provincial Road 32 toward Haywood collided with a southbound pickup truck about 9:45 p.m. The occupants of the truck were not injured.
A 41-year-old man was killed when his ATV rolled in the Interlake north of Gimli.
Two Saskatchewan men in their 30s died after crashing an all­terrain vehicle near Swan River, 500 kilo­metres northwest of Winnipeg. Their quad ATV was travelling through a farming area when it drove off a steep embankment and crashed into the ground below. Both riders were wearing helmets at the time of collision.

Three people are in serious condition following a collision of two all-terrain vehicles in the RM of Hanover. At approximately 9 p.m. Monday night, April 19,  members of the Steinbach RCMP responded to an accident involving ATVs on Road 33 East, near Grunthal.
Police determined that a north-bound four wheeler carrying a 26-year-old from Grunthal had rear-ended a second, stationary four-wheeler being riden by a 30-year-old couple, also from Grunthal.
Police also determined the north-bound four-wheeler had been reported stolen from a resident in the RM of Ste. Anne in 2006. Alcohol was not a factor, but it is believed speed was in the accident.

16 Jan 2010 ... A Nova Scotia teenager is dead following an all-terrain vehicle accident in the community of Devon Friday night

Jan. 7, 2010—A 60-year-old man from Mitchell's Brook, Mount Carmel, in St. Mary’s Bay died Wednesday when a three-wheel ATV he was driving went over an embankment landing on a rocky shoreline 100-feet below. RCMP say the accident occurred about 5:15 p.m. as the man was driving the ATV out of his driveway. The machine crossed the roadway and left the shoulder of the road becoming airborne over the embankment. The man was not wearing a helmet. The man was transported to the Health Sciences Centre in St. John’s where he was pronounced dead on arrival. The ATV was seized for inspection and the police investigation is continuing.
Posted by Jenn Jilks at 13:59

We live out in Last Mountain Valley and on March 15/th. 2010, we had a 'yahu' coming motoring in on his ATV. I was around the side of the house snow-shoveling. He didn't know I was outside and I didn't realize he was in our yard(should have considering no gate or fence)until I heard the most tremendous scream. I thought whoever it was, was in great distress. I rushed around the house to see a guy on big honking ATV wheeeeeeeeeeeeeeeeeling around our parked vehicle like a bucking bronco. He was drunker than a skunk and steering with 1 hand on, and the other clasped around some Molson brew. On his rack he had 12pk still with a few to go, and all the while I was talking to him, he was hiccuping and almost falling off the machine. He offered me 1, but I declined and told him, "BE CAREFUL" because he was slurring his words and every second or 2 catching himself from falling off.
I said, "Do you want me to call someone?!" He hiccuped and said, "no thanks!"
So, I said you go on home and take care going back the 2-3 miles to Govan.
Unbelievable... no, it's believable. I wished I'd had my camera!
No wonder folk become statistics!