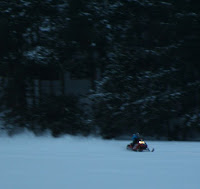 I first came across this concept when I happened to read Selling Muskoka by the Gallon, by Michael Enright. (As accessed 8/5/2006). Mr. Enright (not the The Sunday Edition host) wrote that a PWC, a 2-stroke engine, for every day spent on the lake (100L of fuel), dumps 30 L of gasoline in the lake through inefficient burning of fuel. He has gone on to write another piece about snowmobile pollution: The Well Groomed Trail. Curious, my research took me to Haliburton County Collection Highland Cooperative research paper list, which cites a number of research papers. Predicting the effects of snowmobiles [PDF] is another frightening study. 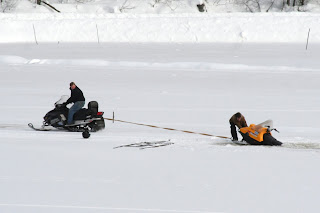 Aside from the pollution, due to noise and chemical environmental affects, subnivean mammals are also impacted. These are small mammals such as rodents, shrews, squirrels and voles that inhabit the sub layer of snow during cold months through underground tunneling and nesting. An ecosystem is a fragile thing. As humans encroach on habitat, we loose the diversity that makes Muskoka special.

After contact with a new author, regarding Carol 'A Woman's Way, I became curious about snowmobile pollution. I know that PWCs are terrible noise and gas polluters, I wasn't sure about snowmobiles. I know that the smell of gas, after they fly by, is horrible.  In one hour, a typical snowmobile emits as much hydrocarbon as a 2001 model auto emits in about two years (24,300 miles) of driving. 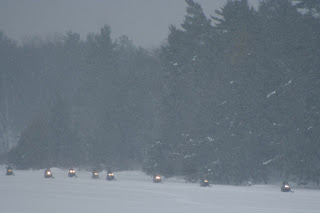 Amongst my research findings... 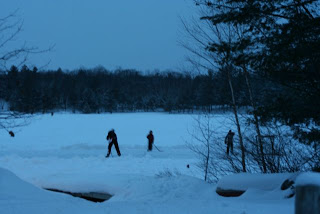 As with Kyoto, and the recent United Nations Climate Change Conference, Copenhagen 200, progress is slow and negligible.
There is so much to do in Muskoka, aside from polluting.

The pollution from snowmobiles mostly consists of aromatic hydrocarbons, which are a class of chemicals that result from incomplete burning of oil, gas, wood, tobacco, garbage and other organic sources. PAHs are also emitted by inefficient wood furnaces, fireplaces, and leaf burning. The chemicals are of concern because they can affect health. The pollutants are linked to heart disease, breathing issues, and cancer.

writes: On November 8, 2002, the Environmental Protection Agency (EPA) promulgated regulations limiting air emissions from snowmobiles. These regulations required a 30% reduction in emissions beginning in 2006, with more stringent standards (requiring 50% reductions) effective in 2010 and 2012. The standards were challenged in court by both the snowmobile manufacturers and environmental groups and were vacated in part and remanded to EPA in part by the Court of Appeals for the D.C. Circuit, June 1, 2004. EPA has not promulgated any standards for snowmobile noise.

Not all pollute as much as the old two-stroke engines, but old machines, like old cars, will likely be running a long time in this economic climate.


Area snowmobilers urged to be patient until more snow arrives ...


Anyone wanting to hit the trails and be green this year can climb aboard a more environmentally- conscious sled. The new Skidoo 600 H. O (high output) E-Tec is quieter and cleaner than your average snowmobile and "virtually smoke-free," according to Sean Ward, of St. Onge Recreation in Barrie.
The 120-horsepower sled uses the same technology that has been designed for boats requiring low emissions. "It's definitely better for the environment and it burns less fuel, so it's easier on the wallet," he said."We start it up in the showroom. We'd never do that with any other two-stroke."


In other international research: Pollution on Svalbard
And that slippery slope: do not take into account all machines, like Kyoto, you can buy your way out of caps through trade offs.


If only the noise would stop!

I owned a noisey, stinky snowmobile back in the 80s. Couldn't wait to get somewhere pretty and turn it OFF. You've really done a great job researching this Jenn. Seems like these kinds of toys can be made a bit more green.

Jenn: An interesting look at something we seldom see in Ohio. I know they are used a lot in the Mountains of PA.

It seems way too early in the season for there to have been so many accidents!

Howdy! Would you mind if I share your blog with my zynga
group? There's a lot of folks that I think would really enjoy your content. Please let me know. Cheers
Check out my page : click the up coming document