Which creature is this?

One is usually a day or two behind in headers or posting, due to doing things other than blogging. (Laundry and dishes are done, which is why Brian is relaxing!)

You may notice I have changed my header a couple of times. This is because the temperatures have been fluctuating, and I like to reflect the scenery as it looks.  Being here daily, our neighbours and my readers, can see what the weather has been like and make travel decisions based on the view from here!!

A new critter has reared its ugly head lately...yet the weather contraindicates such...

The sunshine we had on Saturday, after the overnight storm. The photo (left) is from the 24th. Friday night's snowcovered the puddles and with only single digit freezing temperatures, I am not sure that the lake is safe. 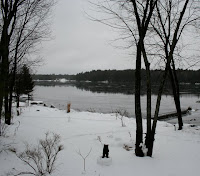 On the right was the lake on the 26th . Then, more snow and sub-zero (C.) temps overnight, and voila. The lake looks frozen.

Now, I was down at the frog pond, only thigh deep, and it was still soggy. After all, ice is an accident waiting to happen. And we had several accidents, and near drownings last year even midwinter.

I was able to dig down into the frog pond today and found some water. This isn't a deep pond, either. It was positively brown on the 25th, and had melted in the last few days. 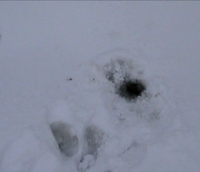 I stood on the ice on Saturday, and I could hear the wind sending the water rolling under the ice, crashing and bashing away. The water level is down and the water is lower than the level of the ice. Very interesting!

The wind is very powerful on a lake, even a frozen one. It pushes the water underneath the layer of ice. With water staying an even temperature, the churning waves even out the temperature, preventing freezing or thawing depending on the season. 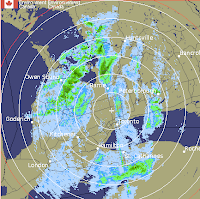 We have been graced with another blizzard today, Monday. Lake Effect snow means that the other side of the lake has disappeared. I love my weather maps!

Just before I settled in for a long winter's nap, I took a walk as I saw some strange creatures on the ice.

Then they had a meeting in the middle of the refrozen lake. 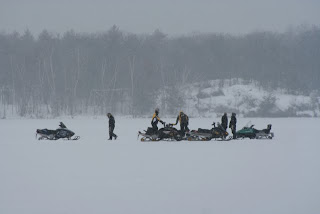 They made loud noises, and were passing much gas, as they gunned and raced their powerful bodies across barely frozen lakeshore.  There was a race for top dog, and only one won! Maybe it was a battle to be the noisiest!

For more info: see this article on ice thickness. They suggest that 4" is required for 200 lb. (a person & gear), 5" for an 800 lb. snowmobile, 8" for a car. Unless you go out and test the ice, walk it and survey it you cannot be sure how thick it is. Ours is variable and I heard it creak much just yesterday.

I hope we don't lose any of our motorized critters this week. (But I hope I'm the one to capture it on film!) One of the neighbours has been cruising across private property (lawns, stairs), perhaps being on the ice will open up their territory.

Love today's header shot. Looks so peaceful - of course not allways so with those brave/foolish chaps racing on the lake.

Great shots, Jenn! And it does look cold! Oh, and I love Oliver's wreath! Wishing you a very Happy New Year!

wouldn't get me walking on it. i will happily watch from the side.
have a wonderful 2010

Beautiful scnenary - I like how you change the banner to make it current!

I see your world is an icy one!

Let's hope no snowmobiles grow through the ice this year. (Yes, I know there will be SOME!) I hear it costs a boodle to have a car, truck, or snowmobile recovered from Lake Simcoe so it's likely true for Muskoka too, eh? No one is allowed to just abandon their vehicles anymore.

Yes, it makes me crazy when I see snowmobilers out on the creek's ice too!

I too love your header photo. Our driveway is one sheet of ice, thanks to the rain and the freeze, very dangerous.

I just finished reading "Paddy" by R.D. Lawrence. It's about his beaver research. He wrote that beaver purposely lower lake or pond levels to have an air pocket under the ice. They regulate the water exiting their dam after freeze up. He learned this the hard way when a tractor he was driving on pond ice broke through, leading to his discovery.

You probably wouldn't like hearing me ride by on my quad. If the snow isn't too deep or soft we can go for a ways in the cold stuff. We just took a nice ride but didn't find any snow in the lower levels. - Margy

Jenn: There is a difference between brave and foolish, why would people take a chance. We have plenty of cold weather to come.

Your header looks like a snow covered meadow instead of the lake. Sure hope your snowmobilers get smart about the ice. But if not, hope you do get pics.

Jenn your header shot is beautiful. I'm thinking a few less of those strange critters on the ice is not all bad! You gotta wonder where their brains are, we have the same issue in the west with avalanches and snow mobiles! Not very much snow here in Ottawa but chilly temperatures today.
Smiles

Mom To The Power of Three said...

I love your header picture! I haven't even seen a chickadee or a bluejay this year but I don't feed the birds because I have a cat. I also love your photos of the lake. Truly Muskoka!