If you are traveling to Muskoka ensure you do your research. With a population of nearly 58,000 we are quite small and our region is misunderstood and often overlooked. In comparison, there are 10 million people residing in the Golden Horseshoe (this is about 1/3 of 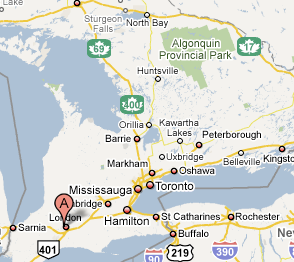 Canada's population), and 5 million of those live in the Greater Toronto Area (GTA). On long weekends the OPP predicts 1,000,000 of these people travel up highway #400 to visit us. Muskoka consists of the towns and villages around Huntsville we have little to do with Toronto far to the south. Our news, economy, weather, climate, topography and municipal politics differ to a great extent.

The Globe & Mail covers 'Ontario'. The Toronto Star's web page (bless them, too!) includes information for Toronto & GTA, plus a page for Ontario. Apparently, to the CBC, Ontario, Canada, consists of Ottawa, Windsor and Toronto: with nothing in between.

We cannot get a more regional CBC station and when we listen to 'regional' newscasts we get lots of information from London, O 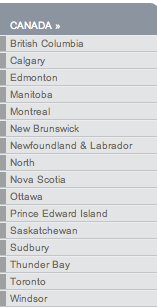 ntario. What London has to do with Central Ontario is exactly nothing. I know there are some tourists who travel here, but we are closer to Toronto and many, many folks must travel to south, often to Toronto, from Central Ontario for health care specialists, for example. My parents both fought cancer with several visits to Orillia's Soldier's Memorial Hospital (120 km north of Toronto), but most of the time they went to Toronto for radiation and chemo. Folks up here often go to Barrie (far closer than Toronto) for access to more stores, rather than driving a couple of hours to the south. We like to try to use local merchants to support the economy in Muskoka, which lacks much in the way of employment. We depend upon tourists and the service industries, which are quite seasonal. Our summer consists of many terrific outdoor shows (antiques, boats, art) and summer and fall fairs... but I digress.

It is quite humorous to listen to weather forecasts on CBC. There are no other choices for news, radio stations or other data. It appears that we are not part of their "listening area". For example, this morning at 7:30 they claimed temperatures in the listening area in the low 20s, but our overnight temperature was 15˚ Celsius. "Normal" temperatures for Muskoka are 16˚ in June with average overnight temperatures being 9˚. We are above that today, with this storm coming up from the US bringing a warm front.

The King City Radar shows thunderstorms to the east of Georgian Bay. We have had thunder, heave rain, and lightning for hours this 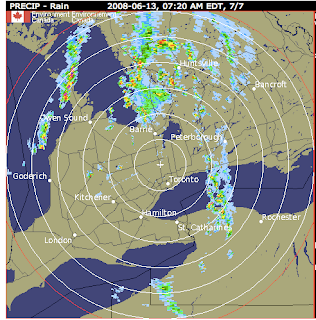 morning. Toronto has been clear. As we know, Toronto is the centre of the universe, however, our weather often differs greatly! Those travelling the 200 km from Toronto to Hunstville must be prepared for anything. Rain, snow, sleet or hail and sometimes all on one day for those of us who remain behind in the winter.

Our weather is affected by the lake effect of Georgian Bay to the west of us. The winds pick up welcome moisture and send it to us, especially in those hot, more dry days of August. Visitors seem to need to make bonfires and that causes its own issues in terms of the quality of our air. The big cities to the south often send their smog from as far south as Toronto, Detroit and Buffalo.

It is a great place to live even if no one else recognizes us!

But, but but! Toronto is the centre of the world! How *dare* you suggest otherwise!