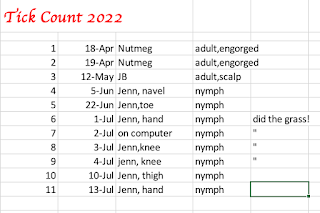 First one on Nutmeg, April 19th.
Nutmeg brought in her second tick in two days. I took it off her, we put it into the jar with a cotton pad of rubbing alcohol. JB hustled into the vet's offices and we put some tick prevention goop on them. 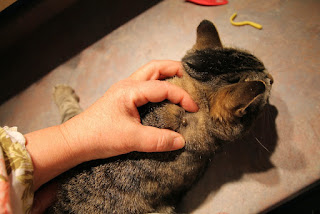 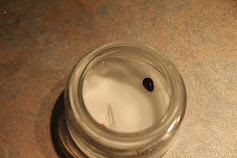 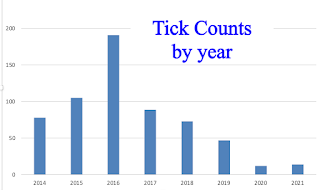 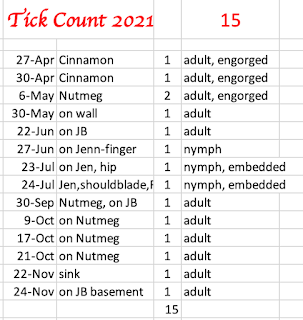 Outdoors, it is tick season, again. We ordered goop, and applied it to cats in May. They have been sparse.
June 22 – JB had one.
July 23 – I had one. I did the long lawn! 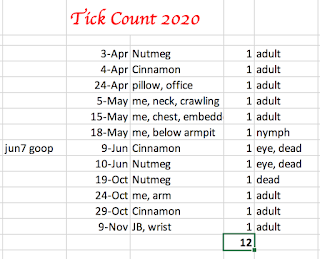 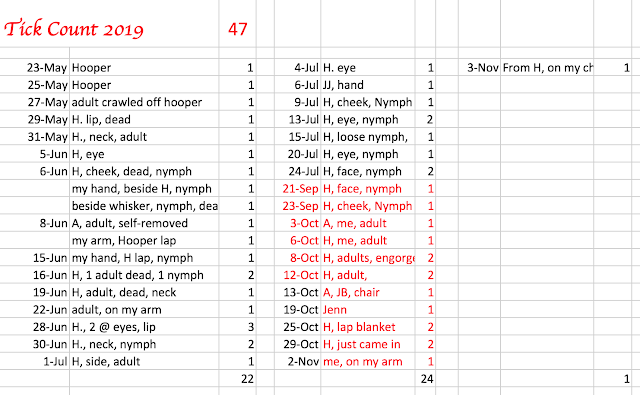 Oct. 19 – Out for a walk around 11 a.m. I could feel one crawling on my neck.
Oct. 13 – Gave Annabelle Tick meds.
Oct. 8 – Sept. and Oct. the adults have appeared. 12:30 a.m. I checked Hooper, sleeping in the Muskoka Room. He had a large one, engorged on his neck, and another new one his neck. Gave him tick meds.
June 22nd – I'd watered the fountain, then sat on the back deck. I found a tick wandering on my arm.
June 16th – in his neck
June 6th - Hooper brought two in, one on him, one on me, as he snuggled.
June 5 – eye rim, nymph
May 31 - adult, alive, Hooper's neck
May 29th – One on Hooper's lip, dead.
May 28th – gave Hooper Bravecto
May 27th – Hooper came over to sit on my lap, having been sleeping on the couch. A few minutes later, an adult tick was crawling on my hand. I gave him some Bravecto.
May 25th – Hooper had another in his whiskers. Dead.
May 23rd –Hooper had his first tick. Embedded in his lower eyelid. Coincidentally, I spotted the first lily bugs. It's been cool, perhaps it has slowed them down.


Tick counts over the years 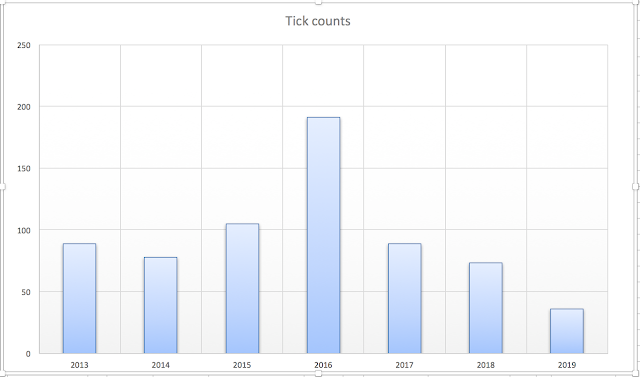 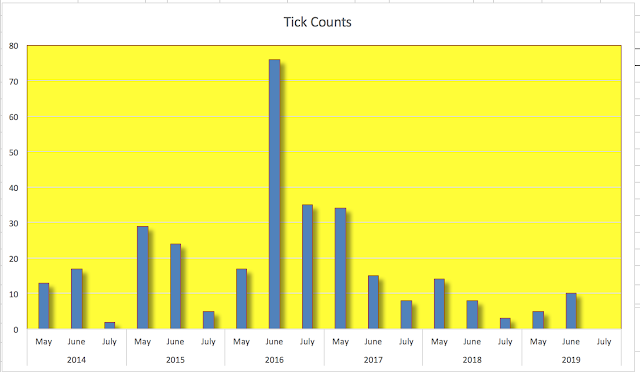 These are all ticks plucked off of the cats. I pop  them into a jar with rubbing alcohol to kill them. 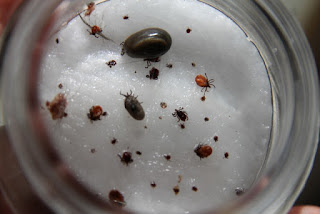 I took two off Hooper, and both had another tick feeding off it. Very weird. Hubby took one off of me Oct. 18th. Dead! 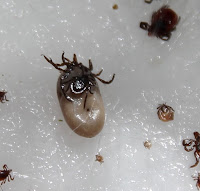 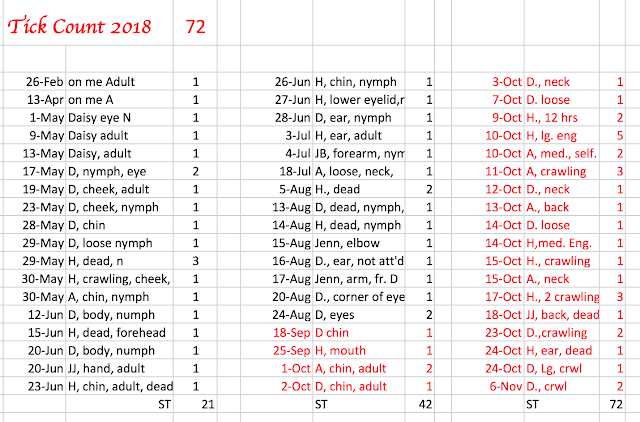 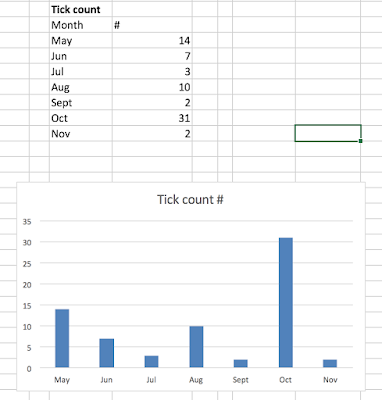 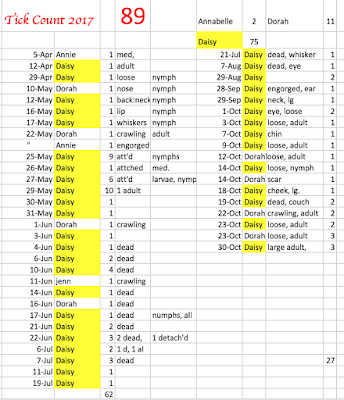 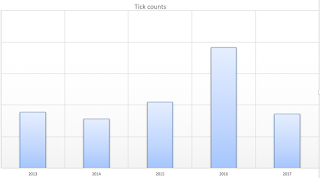 I've compared tick counts for May, June, and July,  as of July 19th. I think the heat of May slowed them down, they are on the rise in October, however. It's perfect May weather.

We did get a new product from the vet, which works for cats. This product just came out this spring. It seems to work really well. 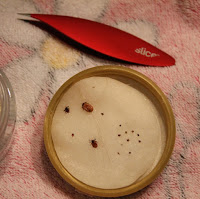 June 10th – took 4 dead ones off Daisy. It's called Bravecto. It doesn't prevent tick bites, but it kills fleas and ticks that have latched on.

Transmission of the Powassan virus can occur as quickly as 15 minutes after the tick attaches and there are... https://t.co/UebtzugC59
— Dr. Daniel Cameron (@DrDanielCameron) June 14, 2017

Hubby spotted one on Daisy, he grabbed a piece of tape, the tick burrowed into her fur, hiding from him. He persevered.

At a meeting, we were told that 80% of Murphys Point Park ticks have the Lyme disease bacterium. 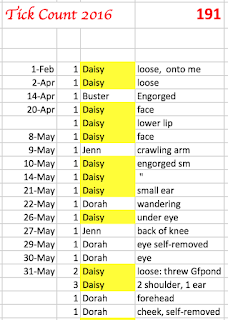 Incidents of Lyme Disease are down by 40% in southern Ontario (compared to the last 5 years), with the drought. Apparently, the nymphs are vulnerable to lack of moisture. Most Lyme Disease victims are reported during summer when the small nymphs are difficult to detect. Most of the ticks we've harvested have been nymphs.  They don't like extreme heat or sunlight, either.


Sept. 26 – Chased a tick on Dorah for an hour. Got it! Piece of cellotape. Done. Two on Daisy. Annie earned only her third tick Oct. 4th. They are adults, now, and easily spotted on white cats!

Mon., Sept. 26th: a gift. I looked down and there was an adult tick. Daisy had just visited me. I'm sure she brought it in. sigh.

Thankfully, they've slowed down over the heat of the summer, picked back up in the cool of September. Daisy picked up 5 on September 3rd alone. She sits in the grasses and looks for mice friends.

They continue to mature and bite here up until first frost, November.

Up to this point, most of them have been nymphs (8 legs), with a few adults. The larvae have 6 legs. 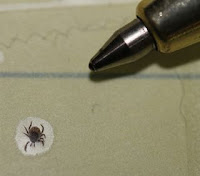 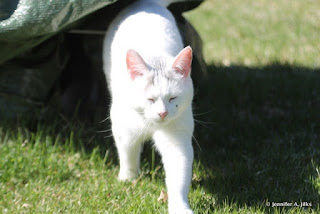 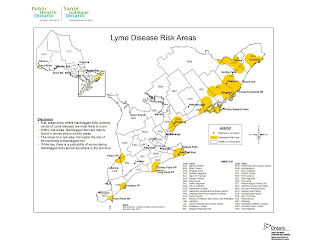 Lyme Disease Risk Areas in Ontario. This map illustrates areas that have been reported as a risk potential for Lyme Disease in 2015. These risk areas were determined by a 20 kilometer radius from the the center of a location where a "Black-legged" Tick was found through drag sampling. It is also important to note that black-legged ticks will also feed on and be transported by migratory birds, so there is a low probability of encountering a black-legged tick almost anywhere in Ontario.