I am proud to say we have participated in citizen research, e.g., reporting on nestings (phoebe, robin, wood ducks, barred owls), feeder watch, Interactions occurring at feeders, and the like. We have also released rehabilitated skunks (3 in 2017)) and raccoons (8 last fall + 4 in 2016) from our local wildlife centre (Skunk and Raccoon Release Photos – Rideau Valley Wildlife Sanctuary).

Sadly, 3 of our 8 Ontario turtles species are *endangered (softshell, spotted, wood turtles). One is extirpated (box turtle), 3 more are of 'special concern' (snapping, map and musk/stinkpot turtles), and Blanding's is threatened. Our painted turtles are doing well.

Wednesday, May 16th, we had people from the Canadian Wildlife Federation come to do a survey of Blandings Turtles. Spoiler alert: I am happy to report that they found one in the wetland.

Firstly, we skirted the wetland, binoculars at the ready. Then Dave determine the three of them would march in the deeper wetland. Turtles tend to come out in the morning, to warm up on the tussocks in the sunshine. 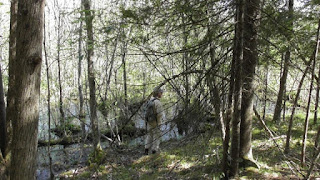 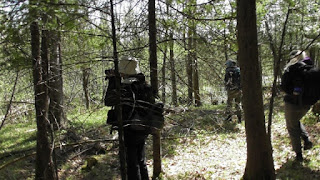 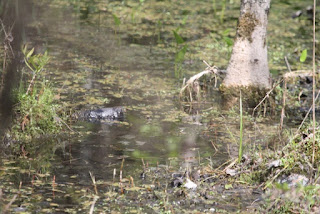 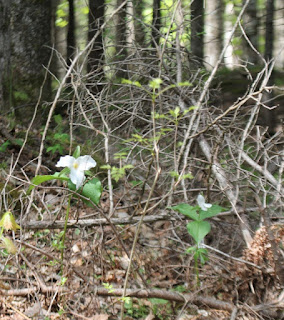 Dave, and two of his students, went off to explore the actual wetland from The Point. They shed their backpacks, and marched away.

I took one student and skirted the edges, going down to the frog pond, and back. The others weren't back at our meeting point, so we went off right to the end of our property and returned to The Point. 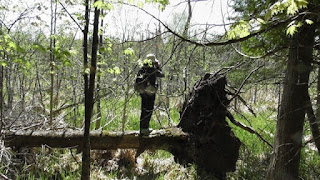 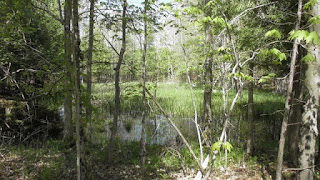 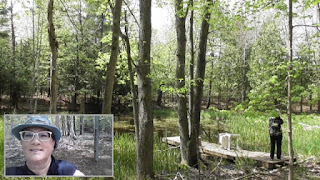 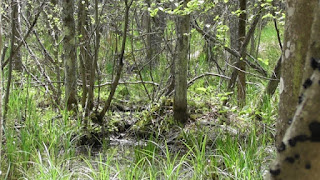 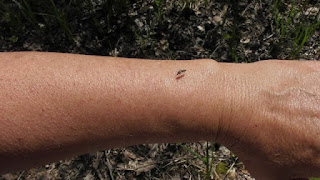 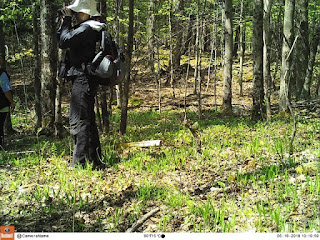 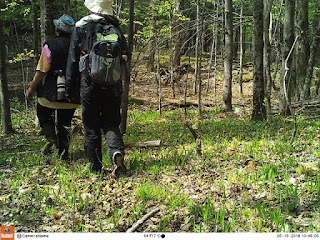 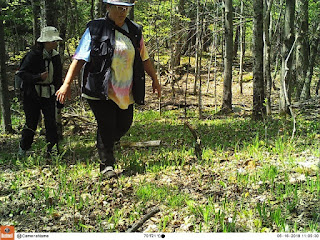 Finally, all of us took a final walk to our third lot. It was slow going, as the young ladies had to turn over every log looking for salamanders, snakes, and the like. The trailcam captured us! 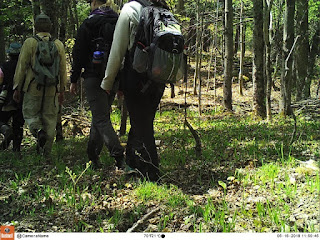 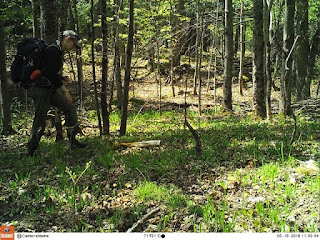 Here is our trek.
The X marks the spot where they found a Blanding's Turtle!
Dave's student, with her M.Sc. specialising in turtles, found one in the bog. Dave sent me her photo!
The Y on the map marks the spot where we found the porcupine carcass.  I'd put its body there, as he was roadkill. The turkey vultures made swift work of him, just a few bones remain. I'd totally forgotten it was there. They found it! That is where I put the grouse, as well. Only its feathers remain. 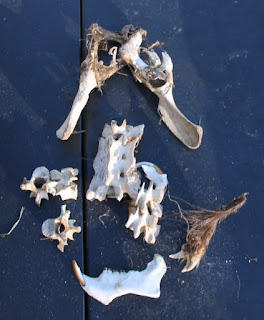 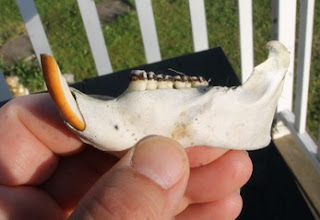 When we were done, hubby invited our crew to sit for lunch. He brought out juice and sandwiches, which he'd bought in town while we were tromping around. I hauled out the umbrella, fetched a few chairs. We sat and had lunch. We watched the birds and then a swallowtail in the flowers. 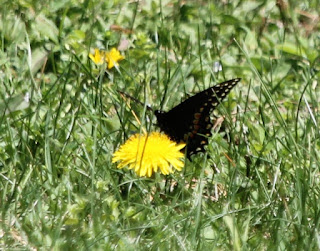 While we chatted, Dave, the CanadianWildlifeFederation.ca Freshwater Turtle Specialist (Help The Turtles), explained that ours is the 5th site they've explored. They found Blandings in 2 of the 5 sites. Off they went to their next location. 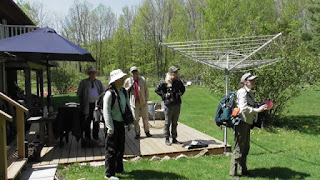 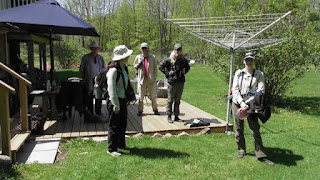 The next day Dave emailed me and said that on their way home, "We found two Painted Turtles alive on the shoulder of roads on our way back to Ottawa and one juvenile Blandings. It is way too early for nesting season to have begun, so it must be turtles moving from wetlands they were wintering in to summer ranges."

I didn't realize it at the time, but I did find one in October, 2012. I have no memory of the location, but recall it was covered in duck weed. We had a lot of rain that October. I think the date is accurate, it's hard to say, although they should have settled into their winter hibernation by then!

Why are turtles facing extinction? (CWF)

The Canadian Wildlife Federation and Scales Nature Park are calling for more people to help to save turtles at risk after record numbers of dead turtles were found last summer on roads in the Muskoka and Ottawa regions.

*The four categories, or classes, of "at risk" are on a continuum:

Ironically, hours after turtle surveying, hubby found a painted turtle, quite bloody and wounded on the highway. He brought it home. We ended up driving it to Rideau Valley Wildlife at 9 p.m. They assured us they would sedate it, then check it out in the morning. It was 49 minutes in the dusk, and 56 km. We arrived there at 9:35 p.m. (These are archive photos.)
Posted by Jenn Jilks at 08:05

They are very dedicated. You too.

Hari OM
Wow - that was rewarding to have a sighting right by your home; informative and interesting post! YAM xx

You certainly should feel proud of your contribution to the survey!
Great photos!

What we do for the strays and waifs. This last week our VERY fluffy stray long haired boy had diarrhoea!!! Even in a dire state, the vets loved him so much. This week, back for another check up, he will be at the top of the " Adorable list".I need to post some photos. Hope your wee turtle will be OK.

I find turtles interesting. we don't have any here. You are doing a good job to participate in a survey.

Lovely hike, but so sad to read about all the injured turtles.

I think the ones here in the pond that I saw yesterday are of the painted variety.