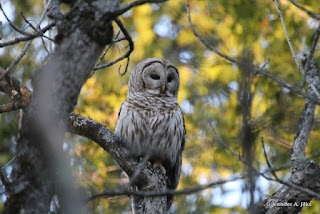 Walkies after dinner, I thought. It is supposed to be quite healthy. I was just finishing up dinner and I heard the owl's familiar song: You can listen here: Barred owl when I heard him talking to his mate in the daytime.

I found him on a branch, again. Daisy helped. I'm going to have to ensure she is locked up when I do this again.

I went to my book on owls, Owls of the U.S. and Canada  by Wayne Lynch.

Their talons can spread 13 - 15 cm, or 5 - 6" wide. Lynch calls them 'Weapons of Mouse Destruction!' You can seem them in these photo from the dead owl we found at the side of the highway.
Dark brown eyes, a pale yellow beak.
"Mainly nocturnal."

Barred owls either build a nest in a tree, or use a cavity. It has to be a big one, as they are large birds! They prefer a cavity, obviously, and can use a particular tree for 10 years. This is why I'm rather eager to find their nest. The ones who are born in a nest climb onto the branches. That would make them easier to spot.

They fledge in 4 - 5 weeks. In the meantime, using their wings, owlets can climb 6 metres up a tree, using strong talons, before they can truly fly.

This owl has been sitting high atop a gully, with wetland below. A perfect spot from which to survey his territory. He seems rather sleepy in the day (they are nocturnal), thankfully for Daisy. I've scoured the dead trees to no avail. They prefer a hidden, empty cavity, to a tree top nest. I think this pair is in a cavity somewhere.

Since they incubate a month, and nest a month, I thought I might have a chance to figure out where the nest is, but so far, no luck! My birding community suggest I go out at dusk and listen for them as the chicks call for food at this time. I have a better chance now that there aren't any leaves out, but I'm giving up hope!

The male brings her food, and she will feed the chicks once they hatch. The male barred owl might feed the chicks, Lynch says, but he won't dismember it. Momma owl will clean up the nest, eating feathers and feces the chicks leave for her.

Owl chicks in a nest ( as opposed to a cavity) will become branchers, as they move out onto the tree branches, still being fed by parents, howling for food. This is dangerous, and must be a risky period of time for the family. The noise of the chicks can attract predators (e.g., Great horned owls – one nested in the forest across the highway). 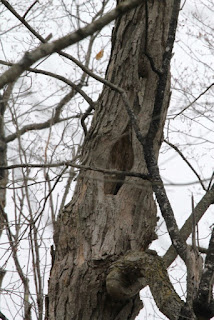 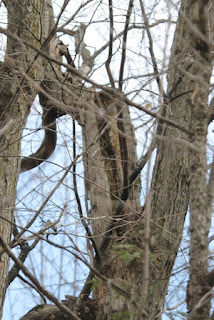 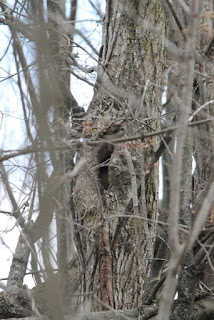 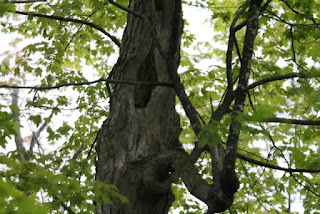 They sit and watch for victims, but they can hunt like hawks do, zooming across a spot and cruising for prey. They estimate, from research, that 2/3s of their prey get away. When they eat a mouse, they swallow it whole. The indigestible bits (fur, bones, etc.) come back out in a pellet. I've been back several times and found a couple more pellets. He seems to sit in the same tree, night after night. These owls can eat 10 mice in a row, if they catch them.

They eat small mammals, birds, amphibians, fish and invertebrates.
This is a feather I've found on his favourite perch. A large tree in a different part of the forest. This is where I've been finding owl pellets. What the heck, the curiosity was killing me. I dissected them and found he'd snagged something relatively large. Thankfully, not Daisy! 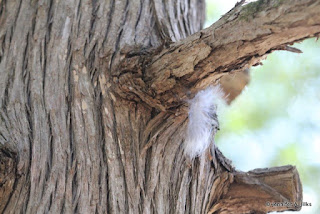 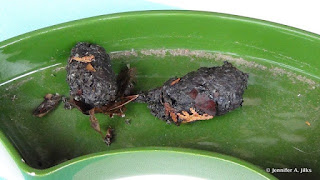 Potential nests are few and far between

The older dead trees have to be large enough to accommodate the larger owls. I would love to save up for a barred owl nesting box, but they seem to be doing fine! The dead trees are beautiful. 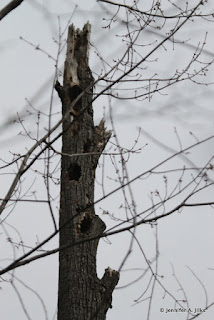 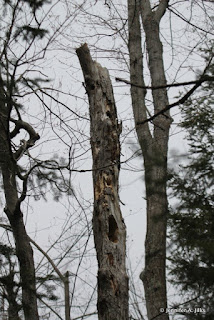 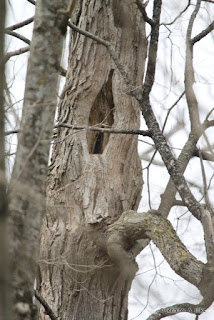 Hari OM
Golly that was an interesting read - wishing you luck in locating the nest of the one on your territory!!! YAM xx

It's great to have such a wonderful place to walk after dinner -- you might as well live in a National Park or something -- there is so much right there in your 'yard'. Love the owls.

Would it really fly down and attack Daisy? Maybe in the daytime she is safe, they look so beautiful, but guess they have to find prey to live. Your wetland is a super spot , and dead trees have wonderful holes for nests.

They are formidable birds.

What a wonderful opportunity to see them close!

We have a Barred Owl somewhere in the forest across from us. We can hear him each night, and sometimes during the day. - Margy

Wow! This is fabulous information. We have a Hawaiian owl called Pueo, but I've never seen it.