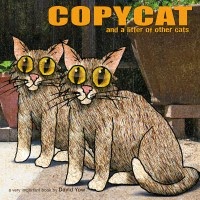 It's a lovely book for a gift for a cat lover. The visual puns are merciless.

David Yow's press photo (see below) is a bit scary, kind of reminds me of the debate around Trivago Guy (Tim Williams), who people claim looks like a middle-aged ruffian in the ad. #TrivagoGuy was roughly bearded (for the concurrent gig he was in), and the shoot had a dresser with several wardrobe changes, but the client chose this messy look.

The German-based company is having a Dress the Trivago Guy contest, with a free trip to Berlin to watch the update commercial shoot. Apparently, the target demographic wasn't me.


But back to David Yow. I've never heard of the bands he was in, but the 90s wasn't my decade! For those with disposable incomes, and an ability to spend it on fun, this is a cute book. Seriously, though, the photo is very off-putting!

They are cute drawings mixed with photos, very creatively crafted, with an endearing little face on each one.

and a Litter of Other Cats
by David Yow 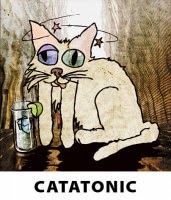 “I love cats. Always have. The only time I didn’t have a cat was a brief hell in Chicago where I lived in an apartment whose landlord didn’t allow them. At that place, I had a life-sized cardboard cutout of a cat which I named Toody. I also love wordplay. I’m the only adult I hang out with who still gets a kick out of puns. I make up palindromes. I used to write songs and poems (these days, I leave that for the songwriters and poets); in this book of cat-pun drawings, I have made a concerted effort to come up with ideas that range from really funny to really amusing. The entire litter of animals in this book are line drawings that are ‘colored in’ with photographic textures, and each cat is dropped into a photographic setting. Yep, that’s the truth.” 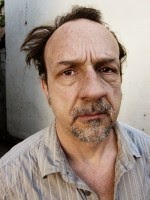 DAVID YOW is an artist, actor, and musician who is best known as the singer of the bands the Jesus Lizard—arguably the best and most popular indie rock band of the 1990s—and Scratch Acid. He lives in Los Angeles. He is the creator of Copycat: And a Litter of Other Cats.
Posted by Jenn Jilks at 07:17

He does look a bit rough in the ad. I must say I find the ad very annoying. One evening while watching CBC news for two hours I saw the ad 9 or 10 times. ALL right already!

It's so true, EG!
Hubby watches a lot of sports while I blog and it's been on with our Canadian tennis players.
This messy man doesn't inspire me to use the website.

Sounds like a great Christmas gift for our friend Jeanne. She takes care of our US mail and condo when we are at home up at the cabin. without her help it would be much harder to live like we do. Thanks for the suggestion. - Margy

I like the idea of a book of cat cartoons,