Do you know who creeps about in the dark? 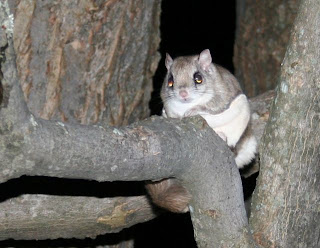 
I thought about these the other day. There aren't many critters who visit a bird feeder in the night.


When in Muskoka, on cold February night in 2009, I realized that Sadie cat was sitting staring at the bird feeder in the dark. She'd get up and down off of the bench beside the bird feeder.

Then, her head would bob up and down. I thought she'd flipped! I didn't know what it was, at all. After some research, I realized that they were flying squirrels. There were two. It took some time to figure out how to video it (see below), in the dark, and it's not a great video, but it does show you how they bop up and down, like little hoppy rabbits! 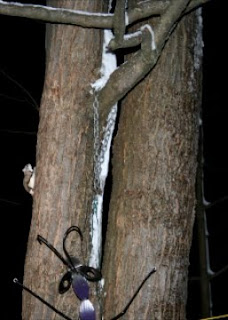 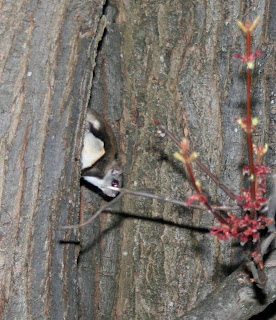 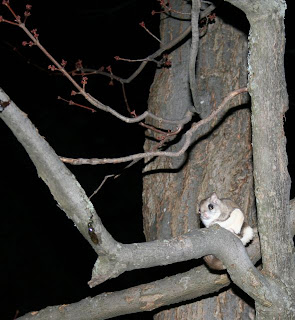 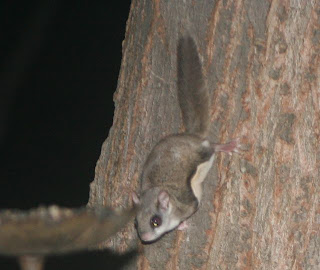 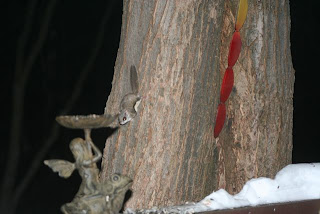 I did some more research, just for my own curiosity.
There are two species on this continent: Northern flying squirrels (Glaucomys volans) and Southern flying squirrels (Glaucomys sabrinus). The Northern inhabit all of Canada, right up to the Yukon, as well as Alaska. The Southern can be found in the Eastern part of the continent, from Florida up to Michigan.
They are about the size of a red squirrel, about a foot long including the tail, with lovely fur flaps or membranes that allow them to glide. No, they don't fly, but they can steer with their flaps, up to 50m diagonally from a tree to the ground, able to make turns.

They have scent glands in their cheeks, to help them find their way, and they live in tree hollows of one sort or another. Nesting materials, like many tree rats, includes soft, cozy mosses and shredded tree bark.
The are omnivores, eating just about anything in season: berries, lichen, fungi, insects, worms, slugs, bird's eggs, tree buds and even sap. There are horror stories of them drowning in open sap buckets.

Predators include similarly nocturnal owls, of course, as well as other tree climbers such as weasels, fishers, and snakes.

As with many species, of both flora and fauna, they are believed to have been impacted by both Climate Change and Habitat Loss. Scientists have found that the Northern and the Southerners have crossed paths, and some research shows that about 5% of the study population had mixed genes.
Now, you know governments, and lobby groups. They are arguing about what to call the mixed breed. The US  National Flying Squirrel Association, wants it to be more American, according to the 72-year-old co-founder.
According to an October article...Southern Flying Squirrels Land in Canada
 Southern flying squirrels are moving into the habitat of Northern flying squirrels. Now people are debating what to call the hybrid offspring.
Steve Patterson, a Canadian educator who uses flying squirrels to teach ecology to school kids and other groups, says in presentations he already refers to the Northern species as "Canadian" because they're "quiet, reserved and peace-loving," he says. "The Southern, on the other hand, is noisy and boisterous, and bullies the Northern flying squirrel," which is the larger but more docile of the two, he says.
There is, of course more controversy. In Canada it is illegal to keep wild animals without special accreditation. The same is true in some states. Steve Patterson, around 2004, tried to adopt a young squirrel for educational purposes. THAT is a long story, but he did, finally, win.
His web page is fabulous, featuring many topics on this little critter: taxonomy, anatomy, predators, life cycle (about 5 years),  parasites (e.g., lice, mites, fleas), range maps, 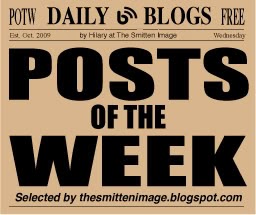 They are cute, love to have them live round here, my dog would go nuts

Oh my goodness that video was amazing Jenn. How great to have these in your yard ....Although I'm not sure Sadie thinks so!

Wow, Jenn. I don't think I've ever seen a flying squirrel, so I enjoyed the video, even if it wasn't professional quality. Laughed at Sadie because I'm sure no cat could ever move as fast as one of those cute little critters.
Not so impressed with the idea of snow fleas, however. Brrr.
Hope you are both well, and the cats, too.
Luv, K

Those are so cute. We get a grey squirrel down by the cabin on rare occasions, but I hear them more often up in the trees. - Margy

Wonderful photos and a great video. I have never seen these flying squirrels except in pictures and nature shows.

there are many more flying squirrels than we think. we have someone here with infra red equipment and he takes us out. Also if your in a forest clearing, look up. You ca be lucky and see them float across the clearing.

That's interesting. I don't think we have any flying squirrels here in the suburbs of Tulsa.

Flying squirrels are so cute. I know that they were around our old camping site and that they liked ketchup. Mike saw them, but I never could catch a glimpse with my puny eye sight.

Oh my.. it's just too adorable. They flit about like little birds. You did great with the captures considering your limitations. And fine research. I didn't even realize that we had flying squirrels around here. Now I know better. Thank you!

Fun to see, I have only seen them a few times. Great shots

congrats on the potw over at hilary's

they're so cute!!! congrats on your POTW!

wonderful photos… they live in the woods behind our home too! congratulations on your POTW!

So Awesome.. Congrats on POTW

Something kept setting of the motion detector lighting - but the cameras were not showing anything but clear feeders. Then one night we got a hint. It has to have been a flying squirrel. (The first I have seen). But the little critter would streak for the trees as soon as the light came on. Most of the time it would be out of sight before the camera was activated.

Question: Are the flying squirrels active during the winter?
ATB!

Good question, Rusty.
No, tree squirrels are active all year round. You may not see them as often in the Winter, since they stay in their nests to conserve body heat.