Yes, so they say. We contacted Hydro, after practicing running the dishwasher at night, doing laundry on weekends, and were told that rural customers, like us, are not part of this transition. We continue to have our bill as an 'estimate' until it is specifically read by Hydro personnel.

It is an interesting concept. Our kids have their water heater on a timer, for example. It heats the water overnight, with cheaper rates, and they seldom run out during the day.
It is more difficult for people our age and older, who cannot schedule particular activities after-hours.

For the frail or ill, those getting family, or paid professional caregiving during the daytime, they are unable to schedule their Activities of Daily Living (ADLS) at anything but during peak hours.

Ontario – Effective today, most Hydro One customers in our province will be on Time-of-Use (TOU) pricing and will be taking advantage of the benefits of their smart meter. As part of the Ontario Energy Board’s Regulated Price Plan, TOU electricity prices are reviewed and adjusted every six months if necessary.
Regulated Price Plan Time-of-Use Price:

For more information about Time-of-Use prices, visit our TOU section or the OEB's website.


That said, in the recent mess of Hurricane Sandy, our Hydro crews are going to the US to help out those States involved in clean-ups. A big issue for NYC is the lack of electricity. 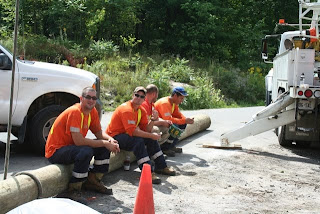 Even after a power outage in Central and Southern Ontario post-Sandy, with 200,000 Hydro customers out, Hydro got customers up and going. They rallied for our neighbours to the south. I often see them climbing the poles, doing repairs, or upgrading equipment. I was there when they put in new poles around a Habitat Build in Muskoka. Very tricky work.

Lift it up, lift it waaaaay up!

The hydro pole is put into place. Then the supports are drilled and wires attached. I wonder if their moms know what they do?!

We are rural clients and have had TOU for over a year now. I do what I can on the off peak price to try and save as much as possible. It starts at 7 pm so it is easy to wait to run the dishwasher, charge phones etc.

I'm not really sure about the idea of peak hours or off hours? I think the energy bill should be for so much a kwh and not all the other charges tacked on. then we would know how much the energy costs. I think some of the extra charges are parasites going along for the ride.

All that snow so soon? Hope it warms up for you but don't suppose it will.