I was hanging my laundry the other day, gazing out over the still lake, and noticed that tell-tale triangle in the water. You c 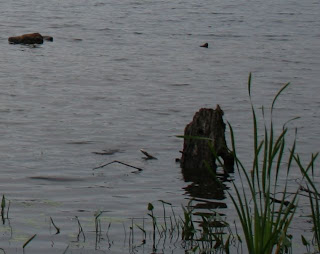 an spot it in the top right of the photo. As a child in the 60s, I was intrigued by changes in the water and things that swam by. As I get older I find fewer creatures and more detritus.

It was a snapping turtle peeking out at the world, checking for predators or prey.
Yes, some people eat them. Some boaters run over them. I spotted one a couple of years ago. It was sitting under a bush in knee-deep water, waiting for prey.

The shell, instead of its beautifully s 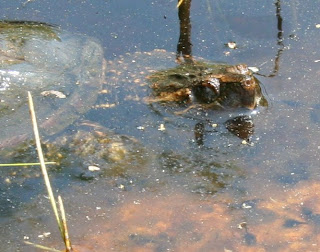 haped, distinct pattern, had bone-coloured gashes. I silently apologized for the two-legged ones who did this. A boat motor is the only possible solution.

With great excitement, I travelled in my canoe. Monday, fairly quiet. The tourists had been running fireworks the previous night, and up till well past 11:00. I decided to capture some meditation time on the water. There was no wind. Screaming kids and speeding boats were silent. 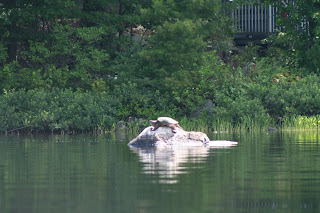 Paddling quietly, passing a few female cottagers who were sitting on their docks reading in the sun, or simply reflecting, I was amazed. 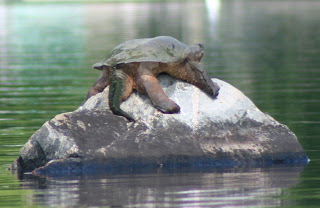 In this case, it was the biggest snapper I have ever seen. Huge, massive ancient. I would imagine 50 lbs. or so, and they can grow to 70 lbs., McMaster U., says.

This is little Patch, the one-eyed snapper that lived in our frog pond for the past 3 years. They are not sexually mature until they are five years old. The females can hold sperm in their reproductive tract until May, when they leave the water to lay eggs. In Muskoka, you often find them crossing the road for that purpose. It is dangerous, as you can see. 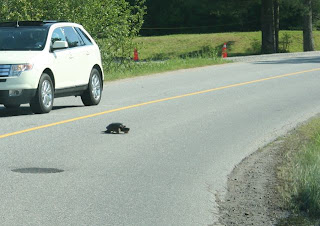 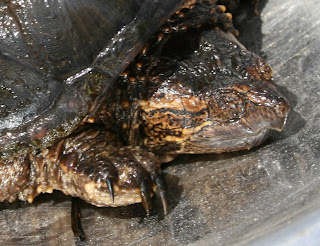 Sometimes you just have to let it all hang out. It is a cold-blooded critter digesting breakfast in the quiet morning sun, around 10:00 a.m. on a Monday morning. Omnivores, they eat anything, much like our frogs that eat each other! (e.g., It eats earthworms, leeches, snails, insects, crayfish, fiddler crabs, frogs and toads; anything it can capture or even scavenge. The larger snapper can capture fish, snakes, and sometimes waterbirds.)
They have a soft underbelly, which is how the raccoon managed to eat Patch. I found its bones in the forest. 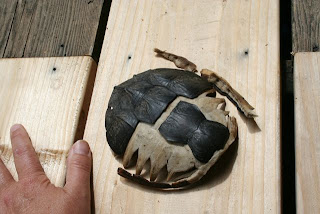 The skins is bumpy and rough. This little guy lived a good life in our frog pond. It had dug itself up, with 10 - 30 siblings around, and made its way from the sandy road side somewhere, to live in our pond. The 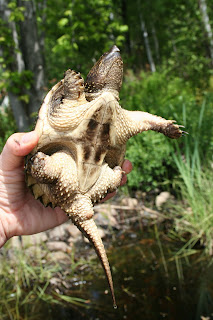 eggs are the size of ping-pong balls.


The newly hatched are just precious, but vulnerable to all sorts of critters.
I spotted this one at the shore. My toes give a sense of the size of them!

Their tales are rough, not dissimilar to toads! They have wicked jaws that will rip apart anything. I remember, as a child, stories of 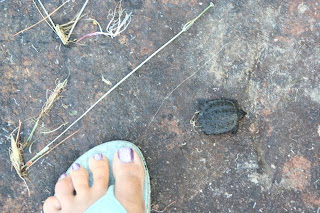 our neighbours who lost their lake trout to them, hanging off stringers beside theit boats. They have no teeth, but powerfully sharp edges.

Here is Patch's shell, eaten away by bugs. I am both fascinated and sad. 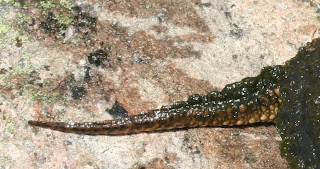 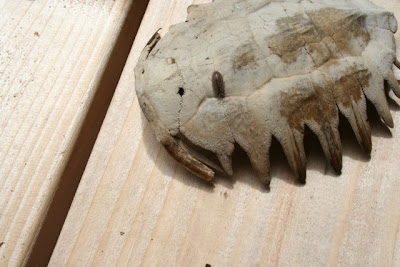 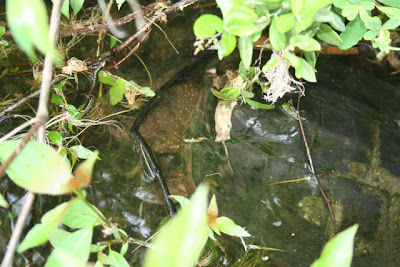 The photo shows the broken shell of another snapping turtle.
Here is my iMovie of this massive turtle, spotted June 20, 2009.
Posted by Jenn Jilks at 07:22

This was an excellent post. Thanks for showing us these wonderful shots from your natural world.

That's one impressive snapper! You don't see such big ones often. I really like the part in your video where you focused long, and then zoomed in for a closer shot—that really gave a good size perspective to the turtle and rock.

You are so kind, Griz! You take such great shots...

I went back today, just to check out the rock. It is about as long as my arm. Longer than the blade of my paddle. I really like getting some perspective as I wondered if the sense of his size would be obvious. I felt so priviledged.

I see you have 4 blogs and have written a book about caring for your parents while they battled cancer. I am working today, so cannot explore your blogs more - but I will be back. My daughter was diagnosed with cancer last year - but I'm sure that is a very different experience than helping the aged.

When I was doing my degrees, I always had such admiration for those in the geriatric stream - over and over again they demonstrated the most compassion out of the lot of us.

Glad to have found your blog(s).

Thank you, Bonnie! What I found dealing with my parent's cancers can be applied to any family members! My book includes an acronyms list, what family members should know, a definitions section, and pain management. Plus, I include my observations of Muskoka! It's not a bad book... :-)

Nice Snapping Turtle...we don't have them here...your text is very informative also. thanks for visiting my blog. cheers.

How very very interesting. We are both on some sort of similar wavelength! :) Love the photos, btw!

Jenn: What a great shot of the snapper. They are so prehistoric in their look.

Amazing creatures! Thank you for this link Jenn, I learned a lot more about this interesting critter.