We live in Canada, a country with a population of 31.6 million (statcan.ca), in the province of Ontario (12 million), in Muskoka (population of 57,500 people). With this size of population accidents occur. There are 8 million people living in the Golden Horseshoe, just south of us, an area that feeds our tourist industry. There are a further million people per weekend who might visit us here in the central and north areas of the province. For those unfamiliar with the water .... disaster can follow. Be safe. Be careful.

On, at approximately , the Bracebridge OPP Marine Unit was dispatched to in Bracebridge to a personal watercraft (PWC) accident.

The driver drove the PWC into a water hazard, was ejected and suffered head trauma. The victim, 62 year old Pauline Moore, a visitor from , was transported to where she was pronounced deceased. A visitor to the Muskoka area, she hadn’t received any formal marine training and had only brief instruction on the operation of the watercraft prior to the accident.
Huntsville OPP is investigating the death of a 17 year old youth from Oshawa who went into the water of Lake Vernon on August 24, 2008. Huntsville OPP was assisted by the Under Water Search and Recovery Unit (USRU). On August 24, 2008, around 9:40 am the USRU located the victim, John Riberio, in 27 feet of water.
Aug. 19th, 2008, two more drowned in Kingston as a grandpa tried to save an eight-year old caught in an undertow.

CBC reports that on August 17th, a man drowned while fishing with a friend east of Peterborough. August 16th a 62-year old drowned while sailing. He did not have a life jacket on in calm conditions and police do not know why he drowned. August 15th a man stripped down to shorts in the downtown Toronto pier, and jumped in. An hour later they found his body.

On Sauble Beach, a 65-year old drowned in shallow water this past weekend. Family were on the shore. 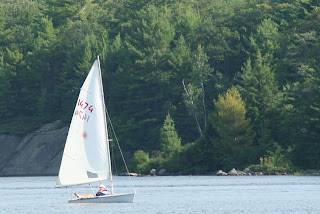 July 26, a beautiful day for a sail, a 16-year old Toronto boy drowned in branch of the Muskoka River, near Bracebridge. Another immortal 20-year old drowned while jumping off of a railway bridge near highway 11. I feel so badly for family, friends and EMS crews. This was the helicopter I saw on the weekend.

A 50-year old father tried to save his 15-year old daughter, who fell off of a dock on July 25th. He ended up in hospital trying to save her since she couldn't swim. another. What are they thinking? He was wearing a life jacket, says CITY.news, but still he drowned. High waves, overloaded vehicles, who knows? I think it time we regulate the size, the type of vehicles on smaller lakes, and educate those who scream up and down our tranquil waters.

July 15th, 2008, a young man has disappeared after he and his brother were kayaking. The lakes are susceptible to sudden winds and rains. Fortunately, he turned up, getting lost is not too hard with bays and shorelines looking the same. 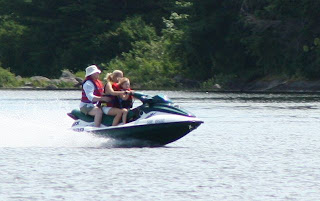 On July 12th a 20-year old drowned , on the same beach as the July 24th incident, after taking a dinghy out from Wasaga Beach.

A 32-year old man was missing in Elgin County. He went under in Lake Erie. How tragic. His body was found by search crews.

In Ottawa-area cottage country, July 9, 2008, there were separate drownings of a toddler in a pool and a 50-year old man at a Gatineau marina.

On our narrow roads in Muskoka there is a risk that you can plunge into the lake. On July 3rd, three young men drowned due to speed and alcohol, after their car plunged into Lake Joe. Rick Smith's photo demonstrates said risk.

The coast guard had to rescue boaters in Parry Sound on the June 29 weekend. 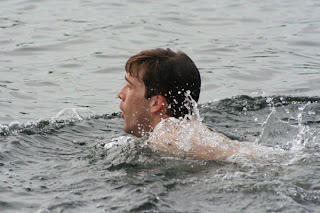 ent to sort out his dock in the high, cold, spring water. The police report says the empty canoe was found 2 km away, his body 100 m from the canoe. His wife of 65 years, alone and, no doubt, bereft.

Another man drowned while trying to rescue teen-aged kayakers on Lake Huron. The 2007 Canada Day long weekend had nine fatalities, seven on the roads and two deaths on the water.
Posted by Jenn Jilks at 09:44

Jennifer is it all death destruction and mayhem Muskoka or are you just trying to keep people away from such a beautiful place?

I am really hoping that people will realize that they are not immortal. This is a provincial issue. I do try to keep most of my postings positive, but, as a mother and grandmother, I hope that the whole village can raise a child!

People need the truth. We study history in order to prevent the same events from occurring in the future, but I take your point!