On our narrow roads there is a risk that you can plunge into the lake. On July 3rd, three young men drowned after their car plunged into Lake Joe. This road is not wide, there are places where one is hard pressed to drive safely even when speed and alcohol is NOT a factor. We are often passed by impatient drivers on solid lines and on curves. The worst are those who travel in a full car who must show off for friends, or who are distracted. Young drivers do not have the experience and the automatic responses that many years driving brings to some.

On Saturday, June 21, 2008, a young man (24 years old) died while boating in Bala Bay. What a shame. What a shame for the rescue crews: Bracebridge OPP, the Muskoka Marine Unit, fire department and local paramedics, and, of course, family members who will face the impact of this tragic death. The 25-year old driver of the boat has been charged with impaired operation of a vessel causing death, and criminal negligence causing death. The pair did not have on life jackets. In yet another incident Friday, June 27, and one is already too many, a father drowned trying to rescue his 24-year old son on a small lake near Huntsville. They were canoeing. How horrible for the wife and mother who watched.

Safe boating is a good practice; this shot, taken in May, 2008, in VERY cold spring water shows some of the dangerous kinds of behaviour. This is a self-inflicted wound and highly preventable by following the safe driving Transport Canada guidelines. Those who operate a boat must have operator cards. The Safe Boating Guide is required knowledge to pass this test. Yet in reality many continue to flaunt the rules. 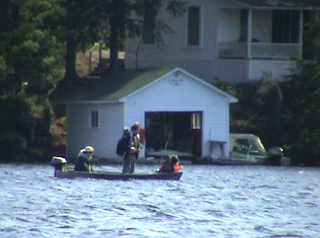 I know how much of an impact it has for any ambulance crew to work with those who are ill, dying, or who have died. The emotional toll on crews is dear. OPP crime alerts are filled with news about our first response teams, bless them all. It is not easy to come to terms with our mortality; even more disturbing to face an unnecessary death. How simple it is to prevent such a tragedy. Such a shame. Someone has to take responsibility. Perhaps, as with drinking and driving, with drinking and boating with more time we will learn the lessons. It is up to friends, family and neighbours to take a role in preventing such tragedies.

The coast guard had to rescue boaters in Parry Sound on the June 29 weekend. Another man drowned while trying to rescue teen-aged kayakers on Lake Huron. The 2007 Canada Day long weekend had nine fatalities, seven on the roads and two deaths on the water, and the 2008 weekend was not over yet.

How little we think of others and the impact our actions makes upon them, both personally and professionally. How much of a cost is this to others? We often see people fishing standing up in their boats. They drain the emergency support services in terms of the time, and the costs to human and financial resources. How little some think of others. My thoughts and condolences go to family members. These deaths can be prevented. Traffic laws and the system should be able to predict behaviour, demonstrate serious issue that can be forecast, and protect our citizens. Those who love their friends should speak out when they see them exhibit dangerous behaviour. For those with demerit points, parents need to be proactive and take responsibilty. We forbade our sons from driving with friends until they demonstrated that they had earned the privilege to drive. Graduated licensing is a good idea. Limits never hurt anyone. If you are not part of the solution you are part of the problem. You can help protect society. Speak out and save a life.