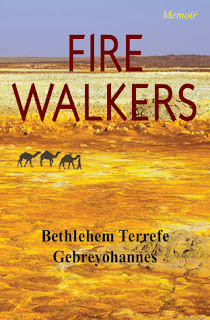 This was a startling book. Hubby picked it up for me, from the new book section of the library (2016). It is timely, in that we've had thousands of Haitian asylum seekers streaming into Montreal, Canada, from the US, where they are afraid.

The author, Bethlehem Terrefe Gebreyohannes, escaped with her family in 1974 from a totalitarian and brutal regime in Ethiopia. It's horrific, shocking, sad, yet joyful and hopeful. I know, from writing a memoir, that it is a cathartic experience. Her family arrived in Canada in 1981, the year we moved from Toronto to Ottawa with a two-year old.

Ethiopia's revolution, led by the Derg (1974 - 1991), led to many fleeing for their lives and it illuminates the horror many face in their desperation to flee, whether it be economic migration, or living in a war zone.

This family fled by taxi, then had to walk across a desert. Fire Walkers educates us about Ethiopia, from our safe and comfortable homes. In the light of day, as 45th of the USA gives a pardon to a Sheriff who illegally detained and abused economic migrants from Mexico, I can be proud that Canada is taking in those who fear the orange man's regime.

The screen captures of the maps give us a vague idea of her journey, and may not be the exact track, but you get the idea. Thankfully, we know Bethlehem survived to write the book, ending up in Lethbridge, Alberta. I cannot imagine the culture shock. She, and her family, have achieved much, despite their trials and tribulations. 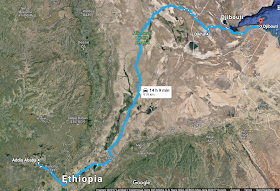 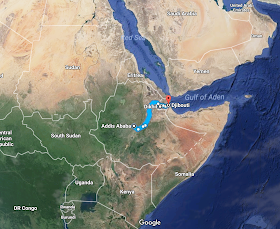 Syrian refugees in Canada restart the businesses they left behind https://t.co/IiwJneohrt From @KellyCryderman
— The Globe and Mail (@globeandmail) August 26, 2017

Thank you for stopping by and commenting. I am so glad to have you here! Fans, blog buddies, and positive, constructive comments, from bloggers, make my day. 'Anonymous' creeps me out!